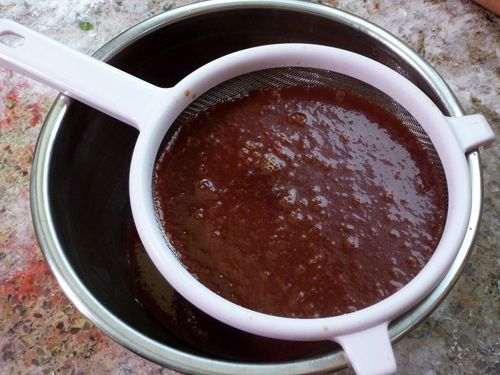 Translated from Spanish as “Sweet Milk,” Dulce de Leche is essentially a ridiculously intense caramel-flavored sauce made from sweetened milk. Unlike true caramel which is made by boiling sugar, dulce de leche is made by slowly simmering milk until it thickens and turns golden in color. These days it is possible to buy pre-made dulce de leche filling but if you’ve never had it freshly made you have been seriously missing out something special.

When I made this batch, I had to force myself to stop eating it by the spoonful while it was cooling because it was so darned tasty! Homemade dulce may be fantastically flavorful, but it does come at a price. The filling needs to simmer for 3-4 hours before it is ready to use so you definitely have to ready to invest a little time to make this treat. But if you take the time, you won’t be sorry. Dulce de leche can be used for much more than filling a cake. It can also be used to make brownies, fruit crisps and cheesecakes.

In a large heavy bottom saucepan, combine the milk, sugar, vanilla bean and vanilla seeds. Bring mixture to a gentle simmer over medium heat; stirring until the sugar is dissolved. When the milk begins to foam on top, stir to incorporate into milk mixture.

In a small bowl, dissolve the baking soda in the water. Add water mixture to the hot milk and stir until combined. Reduce heat to low and cook uncovered barely simmering. Allow mixture to cook, stirring occasionally without working the foam into the milk.

Strain into a clean bowl and allow to cool. The mixture will continue to thicken as it cools. Store dulce de leche filling tightly covered in the refrigerator until ready to use. It can be stored for up to 2 weeks.