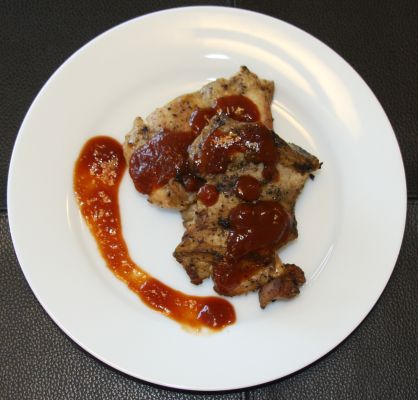 When my daughter was born I “took a break” from BBQ-ing and smoking since most of my time was taken up by a very noisy little girl. As she grew up and started to eat solid foods, one of her favorites foods were apples. After about a year, I had a little more time to start my BBQ-ing hobby again. One day I was in the kitchen making my normal sauce and was about to put in the brown sugar and I noticed Elia behind me “getting her apple fix”. As I watched her I wondered if the sweetness of the apple would be a good replacement for the sweetness of the brown sugar. It turned out it was a perfect replacement and that is how E’s BBQ sauce was born.

Use a hand mixer to blend ingredients and place in a sauce pan over medium heat until it starts to simmer. Reduce to low and let cook for another 5-10 minutes, stirring occasionally.

Lightly brush over meat while grilling or brush it on after.

For this recipe I used boneless chicken thighs, but any cut of chicken will do. Typically I like bones with my cut of meat, but when they don’t have them, cutting or pounding them out as thin as possible helps the met cook faster, you get more “crust” on the outside, but keeps it juicy on the inside.

Package of boneless chicken thighs (or your favorite cut of chicken) from a local warehouse club.

Season with salt and pepper

Place chicken on grill and cook through until done.

Remove from grill and serve with BBQ sauce.