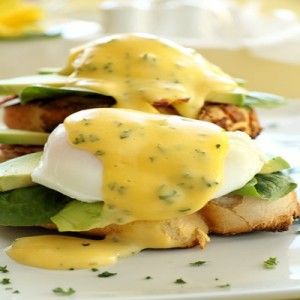 Hollandaise sauce is an emulsion of egg yolk and liquid butter, usually seasoned with lemon juice, salt, and a little white pepper or cayenne pepper. In appearance, it is light yellow and opaque, smooth and creamy. Its flavor is rich and buttery, with a mild tang added by an acidic component such as lemon juice, yet not so strong as to overpower mildly flavored foods. Hollandaise is one of the five sauces in the French haute cuisine mother sauce repertoire. It is so named because it was believed to have mimicked a Dutch sauce for the King of the Netherlands state visit to France. Hollandaise sauce is well known as a key ingredient of Eggs Benedict, and is often paired with vegetables such as steamed asparagus.

Whisk the egg yolk and vinegar together in small bowl or mini food processor.

Melt the Alfa One Spread until bubbling and whisk a little at a time into the egg mixture or pour in a steady, thin stream into the food processor with the motor running.

Heat in the microwave for 10 seconds on high and whisk until the hollandaise is thick and combined. Repeat until desired thickness is achieved.