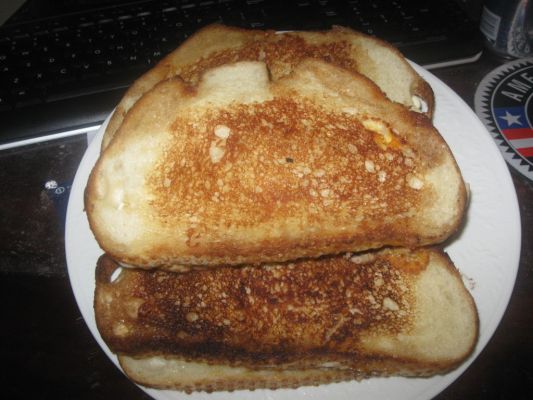 One day, I was preparing to make a grilled cheese sandwich when "Know what? Tuna would taste good on this" randomly popped in my head. So I grabbed a can of tuna fish from the shelf and added it to the cheese I had shredded and some mayo and cooked that up. And without meaning to, I had basically made myself a tuna melt.

The amounts are estimates done from how much cheese I have from the block still in the fridge. Sometimes I have to add more, sometimes I use less. It's just what feels right for that day. The same goes for two or more cans.

1 Chunk cut from a block of cheese (roughly 5 or 6 ounces worth)
1 7-ounce can of Tuna Fish
Mayo
Sliced bread (I highly suggest sourdough. Any kind will do, but I've found that sourdough has the best flavor)
Butter

Finely shred all of the cheese into a bowl, place to the side

Open the can of tuna and drain

Put the tuna into a seperate bowl

Add a little bit of mayo (roughly 1.5 tablespoons at most) and combine

Add in some of the shredded cheese, enough so there's some throughout but not so much that it's mainly cheese. Roughly 2 ounces.

Turn the stove to medium heat and place frying pan on it. Let it be.

Grab two slices of your bread (again, I highly suggest sourdough because of the flavor, and because it's a large piece of bread) and spread however much mayo you like on one side of each slice of bread.

On one slice of bread, add some cheese so that it covers the entire slice and has a slight height to the cheese.

Spoon some of the tuna mixture onto the bread. Again, enough so that it covers the entire slice.

Put a sliver of butter into the pan, enough to coat it.

Add more cheese to the top of the tuna mixture.

Put the other slice of bread on top.

Put the sandwich in the pan.

Make another sandwich. When done with making the second sandwich, flip over the one in the pan.*

Wait until the other side is golden brown and place on a plate.

Add a sliver of butter to the pan and wait for it to melt. Again, enough to coat the pan.

Place the second sandwich in.

2-3 minutes, or until the first side is golden brown, flip.

When the second side is golden brown, place it on the plate.

Cut it in half if you wish.

*If making more than 2 sandwiches, when you are halfway through making the 3rd or higher sandwich, flip the one in the pan. The pan, obviously, is hotter than when you first started.