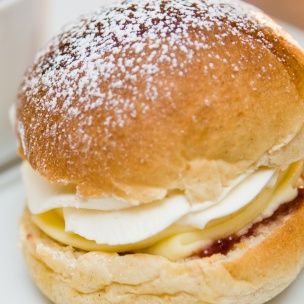 Fastelavn is the name for Carnival in Denmark, Norway and the faroe islands which is either the Sunday or Monday before Ash Wednesday. Fastelavn evolved from the Roman Catholic tradition of celebrating in the days before Lent, but after Denmark became a Protestant nation, the holiday became less specifically religious. This holiday occurs seven weeks before Easter Sunday and is sometimes described as a Nordic Halloween, with children dressing up in costumes and gathering treats for the Fastelavn feast. The holiday is generally considered to be a time for children's fun and family games.

The best part of Fastelaven is the bun. Here is the recipe

Before they go in the oven:
1 whipped egg

In the end:
1 dl powdered sugar

Melt the butter. Add the milk, make sure the temperature is at "baby milk" level before you add the yeast. In a large bowl, pour in the milk/butter mix and add the blended dry mix of the dry parts, reserve a little bit of the four. Only add the last bit of flour if you think the dough is not firm enough.

Cut the dough into 16 pieces and roll them into round buns. Find a baking plate and place a baking paper on it, place the buns on that. Leave them for another 30 minutes. In the meantime, heat the oven to 250C.

Paint the buns with the whipped egg, put the plate in the oven 8-10 minutes.

Leave them to cool on a rack, then split them in two.

The filling is two parts: Whip the cream with the vanilla sugar. This goes in the buns after you have spread some jam (I prefer either strawberry or raspberry). Spread some powdered sugar on top.