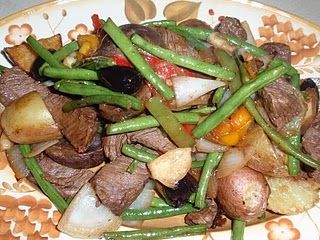 This recipe has been inspired by a Lidia Bastianich recipe that I saw her prepare years ago. It can be made with any vegetables you like. I don't have measurements for everything since I was just adding things as I thought of them (for the marinade). Use what you have on hand to make it your own.

Trim string beans and slice potatoes in half (or the larger once in thirds) so they are all approximately the same size. Par boil potatoes and string beans together until potatoes are just tender. Do not over cook them because they will continue to cook them in the pan (but you don't want the outside to cook faster than the inside so do not skip this step). Drain well. Seperate string beans from potatoes.

Add sliced beef to a bowl and add a little balsamic vinegar, worcestershire sauce, teriyaki sauce and chopped garlic. Just enough to marinate the meat but not enough to cover. Toss to coat all of the beef and let it rest in the marinade on the counter. (You should never put cold meat in a hot pan or it will be tough.)

Heat a large skillet over medium high heat, with a mixture of extra virgin olive oil and canola oil (the EVOO gives flavor but will smoke faster than canola oil so mixing the oil prevents that from happening) just enough to lightly coat the bottom of the pan. Add potatoes and 3 cloves of cracked garlic to the pan. Make sure the potatoes are cut side down so they get nice and brown. Season with salt and pepper. Once the potatoes have a nice brown color turn the potatoes and let them cook for a few minutes add half of the onion. Stir the potatoes and onion (or just shake the pan) to make sure each side of the potatoes get a chance to touch the bottom of the pan. Season the other side with salt and pepper. Once onions are beginning to soften and potatoes are fully cooked, transfer to a bowl and set aside.

In the same pan add the rest of the onion, 2 cloves of the cracked garlic, string beans and peppers. If the pan is dry add a little more oil. Toss everything together until onions start to soften but not mushy. Everything should soften but still have a crunch to it (think chinese vegetables). Season with salt and pepper. Add olives. When veggies are cooked add them to the bowl with the potatoes.

Remove the meat from the marinade and add them to the same pan you've been using. Sear for just a couple of minutes per side (depending on how thick or think your pieces are) until browned on the outside and still pink in the middle. Once meat is cooked add all the veggies back to the pan with the meat and toss together. Add a splash of balsamic vinegar, toss again to coat with vinegar. (You shouldn't need to add any salt to the meat because the marinade has plenty of salt.)