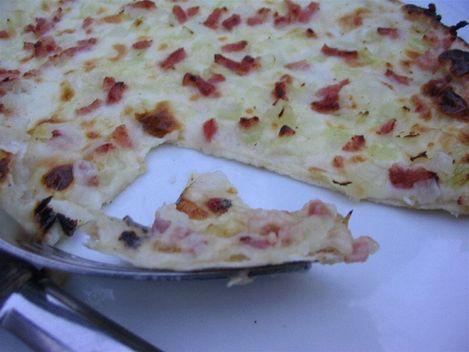 I had friends that had this entree in Paris, France. It was so good that they had to order another one. The French people sure know how to cook. It is like a pizza, but 1 million times better

Roll out the bread dough into a rectangle, and spread out on a baking sheet greased with olive oil.

Place potato slices in a saucepan with enough water to cover.

While the potatoes and bacon cook, melt the butter in a skillet over medium heat. Add the onion, and cook, stirring until tender. Remove from heat and stir in heavy cream; season with salt, pepper and nutmeg.

Spread the onion mixture over the bread dough. Arrange potato slices evenly, and sprinkle with bacon.

Bake for 10 minutes in the preheated oven, until crust is golden on the bottom. Let stand for a few minutes before slicing.

trw0177
The french word for this dish is "Tarte Flambe". This is a popular dish in the Alsace region of France. I go there often and have perfected a recipe for this. I recommend incorporated munster cheese (REAL munster cheese, from Munster France). I use 3 oz.
khefler
Could I use pizza dough
khefler
is the bacon soft or crispy
merryones
Is the bacon precooked before it is put in the boiling water?
kollafidrildi
Yes this is really tasty. On every festival in Germany you can find this. It tastes great with a glass of white wine or the autumn Federweiser. Sometimes it is also served without the potatoes.