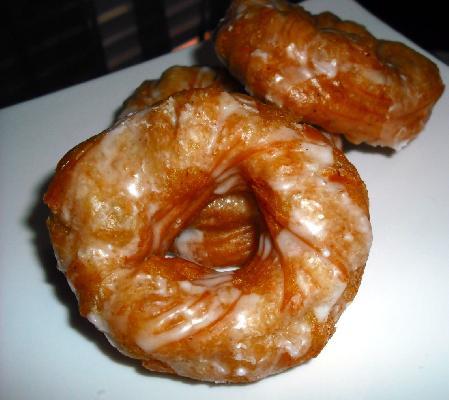 When I was a kid, I use to love Dunkin' Donuts... Best ever made... Sadly, on the west coast, they no longer exist. Now we have been invaded by Krispy Kreme... which I thought was all fine and dandy until I had one. The are SO sickly sweet, I swear they have all been soaked in sugar syrup for 24 hours before being put on the shelf. I am convinced that the doughnuts of my youth were more spicy and not so overly glazed as what I have had from Krispy Kreme...

In the interest of avoiding a sugar comma, I have embarked upon a home-made spiced French Cruller in an attempt to re-create the more spicy doughnuts I remember from childhood... and while not a "Real" Cruller, which is torpedo shaped and twisted (more like a cinnamon twist), they are quite delicious and, for the most part, resemble, in flavor, the delicious French Crullers I use to think were so "yummy" from Dunkin Donuts.

Now I wrote the recipe to fully immerse the crullers in glaze as this is how most french crullers are done. I, however, prefer to just drizzle a little glaze over the top and let it run down the sides in order to control the sweetness a little better and preserve the spicy flavor.

Unlike "true" crullers, which are of German and Dutch origin, French Crullers are based on Pate a Choux or Choux Paste, just like Eclaires and Creme Puffs, However, they are deep fried instead of baked.

Combine the water, butter, sugar, and salt in a large saucepan and bring to a rolling boil over medium-high heat.

Measure out flour and spices and whisk together lightly to combine.

Once water is boiling, remove from heat and add the flour mixture all at once and begin stirring with a wooden or bamboo spoon until the flour has absorbed all the liquid.

Return the pan to the low heat and continue to cook the paste, stirring constantly, for another 2 minutes to evaporate any excess water.

Remove pan from heat and let cool for about 10 minutes.

Crack an egg into the mixture and begin stirring, the dough will kind of fall apart, then suddenly become a homogeneous paste again.

It takes a lot of stirring, you can use a hand mixer, but you donâ€™t want to incorporate too much air into the batter.

Add each of the 3 remaining eggs individually and stir until each egg is incorporated.

When you are done, you will have a smooth and glossy paste.

Fill a pastry bag, fitted with a large star tip, with the choux paste.

Pipe 3 inch rings of choux paste onto the parchment paper.

Place baking sheets into the freezer for 1 hour.

Make the glaze, by mixing confectioners sugar and milk with a whisk until smooth, cover to prevent crusting.

Fill a large pot, deep skillet or your deep fryer with at least 2 inches of Vegetable or Peanut oil.

Remove a baking sheet from the freezer, peel the rings from the parchment and gently slip them into the hot oil.

After about 30 second they will rise and begin to float in the oil.

They will need to be turned once the tops of the crullers puff up.

Once turned in the oil, fry an additional 1 1/2 minutes or until lightly golden brown.

Remove from the oil and place on a brown paper bag, or multiple layers of paper towels to drain.

Once cool enough to handle, immerse them completely in the glaze, letting the extra drip off over the bowl for a couple of second before moving to a rack with a baking sheet underneath to catch any draining glaze.

Let the glaze set for about 30 minutes before serving.

jennybee42
I, too, grew up eating Dunkin's French Crullers. In college we would go at 2 am and get them when they were fresh and hot and they were AMAZING! I am lifetime East Coast gal. Grew up in Maryland and now live in Maine, which is Dunkin' Country. You may find some comfort in that Dunkin' French Crullers are a just a sad reminder of what they once were. Some time ago I also sought how to make a French Cruller and discovered that they were pate au choux. I did recently try a few recipes, (but had not found yours). I discovered yours by accident when I revisited your Ermine Frosting recipe (a revelation in frosting, BTW). However, I do not have any recollection of DD Crullers having any spice flavors at all. In fact, the only donut in their entire menu (with the exception of apple or pumpkin things and cinnamon flavors) that has an identifiable spice profile is the old fashioned donuts. They are a cake donut with no glaze and have a subtle spice to them. Every few years when I see French Crullers at DD I dare to try one but there is no way to recreate that pillowy slightly eggy center with a crisp outside, warm from the fryer and drenched in glaze that I enjoyed at 2 am, when they are baked in a central industrial kitchen and shipped to the stores to sit on shelves until someone buys them, or they go where all uneaten donuts go. While home-made crullers are very good and, in fact, definitely a superior product. They just aren’t the same. Ah, nostalgia. It’s a cruel companion.
Donut Lover
I loved your recipe for donuts, they were delicious. If you like them as much as I do, you can enjoy many more recipes here; recetadonuts.com
pinky57
WooHoo! I can't wait to try this because I can't find a shop near me the makes Crullers. Thanks! (looks great)