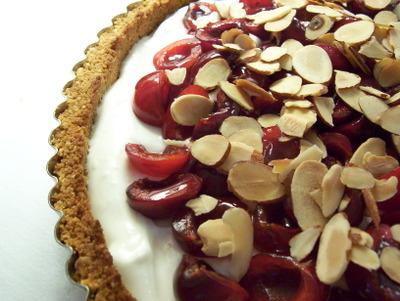 Toast the almonds in the oven at 350 degrees until light brown and fragrant, about 10 minutes.

Add butter, and process until combined.

Transfer mixture to a 9-inch tart pan with a removable bottom.

Using the base of a dry measuring cup, firmly press mixture into bottom and up sides of pan.

I figured that with the addition of the almonds in the crust it would still be okay.

However, after pressing the mixture into the pan, it seemed a bit thin.

So I would strongly recommend using the 9 inch pan.

Bake until browned, 10 to 12 minutes. Let cool completely on a wire rack.

While the tart shell is baking, it would be a good time to pit the cherries.

I do not have a cherry pitter, so using a small knife, starting at the stem end I sliced around the cherry and sort of twisted half of it off the pit, sort of like when you slice open an avocado.

Then using my fingernail I pried the pit loose from the second half.

Trust me it's not as labor intensive as it sounds.

It goes quite fast.

I worked up to five cherries a minute.

Once the cherries are pitted, move on to the cream cheese filling.

In a large bowl, using an electric mixer on medium speed, beat cream cheese, vanilla, and remaining 1/4 cup sugar until light and fluffy.

You could neatly lay the cherries in rows of concentric circles, which looks really pretty, but I decided to just sort of topple them all haphazzardly onto the filling.

It's a little more 'rustic.'

In a small saucepan, combine jam and 1 teaspoon water; heat over low until liquified, about 2 minutes.

Using a pastry brush, dab cherries with glaze and then scatter over the toasted, sliced almonds. Refrigerate tart at least 30 minutes or, covered, up to 1 day.