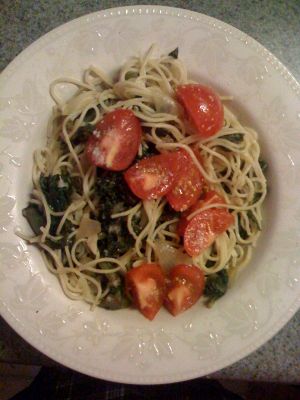 This recipe can be altered by using chard, escarole, or mustard greens instead. I even added a scrambled egg to the leftovers after an egg broke in the fridge.

Bring a large pot of salted water to a boil. Meanwhile, cook garlic cloves in a large skillet over med-high heat, stirring occasionally until golden brown for around 3 minutes. Using a slotted spoon, transfer the cooked garlic onto a paper towel lined plate. Next, add the onions along with the red pepper flakes to the oil in the pan and cook until the onions are light brown, around 10 minutes. Season with 1 and 1/2 tsps salt.

Add the kale to the boiling water and cook, uncovered, for about 3 minutes until just tender. Remove the greens using tongs and shake off excess water. Place the greens in the skillet with the onions. Season with salt and balsamic vinegar. Next, cook the vermicelli in the leftover kale water until al dente. Then drain the vermicelli but reserve 1 cup of pasta water and add to the kale and onions. Toss the vermicelli with the kale and onions and add the cheese. Next, toss with the garlic chips. Add the tomato halves when serving. Lots of work but worth it!