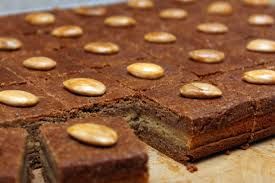 This is a traditional cookie that reminds us of when we were young. We would especially eat this around 'Sinterklaas' (the Dutch version of Santa), when its cold outside and you could smell the cinnamon, nutmeg and the cloves in your mums kitchen....

The Dutch love cookies! We like crunchy cookies, soft cookies, salty ones, sweet ones, big, small, with chocolate, without chocolate….you name it. There is hardly a cookie we don’t like. One that we are particularly partial to is the speculaas cookie: often formed in the shape of a windmill, speculaas are crisp, sweet cookies that have a wonderful spiced flavor. Speculaas are also sold in large, crunchy slabs: instead of cutting it, you just break off a piece and nibble on it. These are called speculaasbrokken.

Even better is gevulde speculaas, an indulgent cake that contains the best of both worlds: flavored with lovely speculaas spices, it includes a center of sweet almond paste. Gevulde speculaas are often sold around Saint Nicholas time, at the beginning of December, but may also be found in other seasons. It is, just like boterkoek, rich and sweet and often served in small slices or squares.

Speculaaskruiden is a mixture of ground spices: cinnamon, coriander, nutmeg, cloves, ginger and cardamom are the main ingredients. If you are able to, make sure to pick up a container of speculaas spices at the store before you leave.

Mix the flour, the spices, the sugar and salt. Cut in the butter with two knives until the butter is reduced to pebbles and the flour feels like wet sand. Add the milk and one egg yolk, and knead the dough until it combined. You may need to add a tablespoon of milk if the mixture is too dry. Shape into a ball, wrap in plastic film and refrigerate for several hours, preferably overnight.

Mix the egg whites, one at a time, with the almond paste so it becomes spreadable.

Preheat the oven to 175C (350F). Divide the dough into two parts. Grease a pie pan or spring form and roll out the first piece of dough. Cover the bottom and the sides of the pan. Spread the almond paste over the dough, roll out the second piece of dough and cover the filling and the edges of the pie form.

Brush with the remaining egg yolk, place almond halves around the rim of the cake and bake at 175C (350F) for about 45 minutes until done. Let it cool before taking it out of the pan, then carefully slice into 12 pieces and serve.