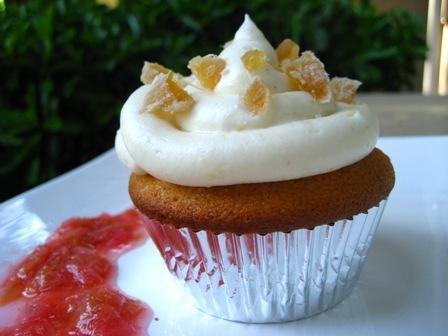 I still had quite a bit of rhubarb left after the last cupcake because I bought a crazy amount of it. I think you're starting to get just how much I truly love the stuff. Rhubarb is versatile, unique, has an interesting history, and if you don't know what you're doing could kill ya'. I want to pair it with blood orange some time, or maybe contrast it with mango or kiwi and see if something tropical would act as a good counterpoint to it.

However this cupcake was focused on some more traditional flavors. Rhubarb and ginger is a popular combo in England and for a while it dropped out of use, but it's starting to really make a comeback as chefs and restaurants are utilizing it for more and more for savory and sweet dishes (to any British readers, I'm just passing on what my friend in London told me). The spice of ginger pairs well with the tartness of the proud stalks, and when made into a blushing sweet compote creates a taste that's almost candy like.

The rhubarb compote is pretty strong so ginger was utilized in the cake, the frosting, and with presentation. I really liked the flavor and thought they were fantastic. I think ginger is a matter of taste though, as I kind of wanted even more, and Rob wanted less. Play with it and see how you feel. It's a refined cupcake for sure, I don't know if many children will like it. Not that they'll dislike it, I think they would just cock their head to the side after a bite like a dog befuddled by a strange sound. All adults and hardcore food lovers out there will absolutely adore it though.

It's simple to make, cheap to prepare, and fun to eat. I look forward to future experiments with rhubarb. By the by a special shout out to Elise for lending me that pastry kit and bags for me to practice my piping!

Originally made for my blog Vanilla Garlic.

To prepare cupcakes,beat the butter for about 2 minutes until well creamed.

Add the sugar and beat until light and fluffy, about 3 minutes, scraping down the sides of the bowl halfway through.

Add the eggs one at a time and beat for 30 seconds each. Scrape down the sides and bottom of the bowl.

Mix in the grated ginger.

Add some of the flour mixture, then some of the milk, alternating between dry-wet-dry and ending with the dry ingredients. Mix together until just combined.

Bake for about 15-18 minutes. Cupcakes will be dense, heavy, and moist. A toothpick should still come out clean. Let cool on a wire rack.

To prepare compote, mix the rhubarb and sugar together in a saucepan and let sit for about 15 minutes.

Place on medium heat and stir occasionally, until the mixture is soft and the rhubarb has broken down a bit and has a soft pink color. Set aside to cool.

Cut out a small cone out of the top of the cooled cupcake and spoon in some of the rhubarb compote. Cut the cakey part of the cone off and pace the cap back on. Or eat the whole thing. Go with what moves ya'.