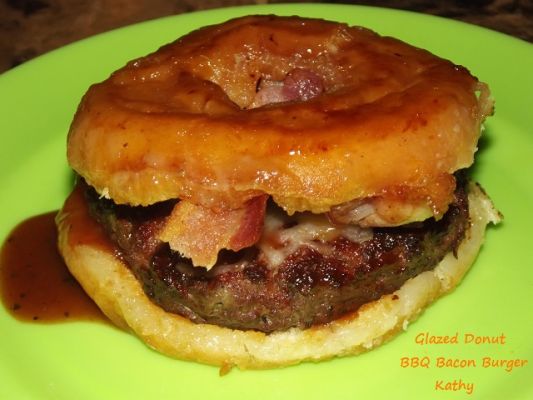 I know, this is a joke, right? NO, it is hubby being off work and watching these crazy shows on TV! He's been watching United States of Bacon, Destination America! Well, Todd, the guy on the show who loves bacon, goes around America finding the greatest bacon recipes!

I must say, this burger is delicious and something you would only eat every now and then for a treat because I'm sure that donut is full of calories! :) We loved this burger! The tang of the BBQ sauce, saltiness from the bacon and the sweetness of the glazed donut were a match made in heaven! I say everyone must try this burger just once in their lifetime! You won't be disappointed!

On the show, Todd recommended using a vinegar based BBQ sauce so we tried a new sauce to us! It was KC Masterpiece BBQ Sauce Southern Style, Cider Vinegar Recipe and the bottle said it was NEW! It was thinner than most regular BBQ sauces and out of this world good! I would like to use it on alot of different things!

In a skillet, fry bacon and drain on paper towels.

Make 6 burgers from the ground beef. Heat grill to medium high and grill burgers 4-5 minutes on each side and then start basting burgers on each side with BBQ sauce, grilling another 5-7 minutes. Add cheese and remove burgers from grill.

Slice donuts thru center to make a bun.

On a griddle or in a skillet melt butter over medium heat. Add sliced donuts, flat sides up and grill until slightly warm. Remove from griddle.