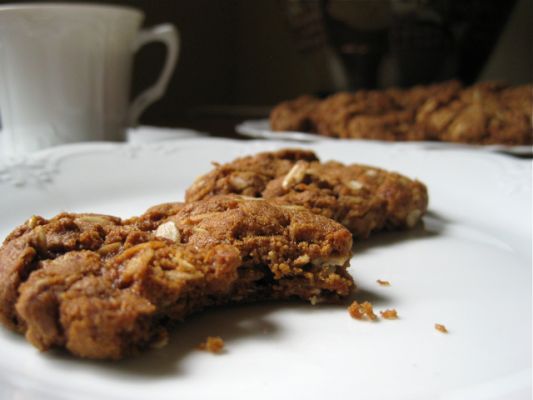 Anzac biscuits (or cookies, as they are called in The United States) are traditional sweet baked treats made in Australia and New Zealand. They are scrumptious, really easy to make, inexpensive; and are part of the baking repertoire of every self-respecting Aussie. They have become one of those iconic Australian foods; and unlike Vegemite – can be happily enjoyed by everyone the world over!

I have modified my friend Pete’s recipe to make it a little more forgiving for us gluten-free pigs. I used rice flour, coconut sugar and maple syrup, instead of brown sugar, golden syrup and wheat flour. I have still used butter – you really need it for the depth of flavor. But you could use another natural granulated sugar of your choice if you can’t source coconut sugar. This nutritionally dense sweetener made from coconut palm blossoms is low GI, and has a rich toffee-like flavor that makes if perfect for replicating the quality of the golden syrup in this recipe. Cook the cookies for exactly 20 minutes and take them out of the oven (they will still be soft) and allow them to solidify at room temperature. Then they will be crunchy on the outside and slightly chewy on the inside.

In a small saucepan, combine the butter and maple syrup, and stir over a gentle heat until melted.

Mix the baking soda with the boiling water in small bowl and add it into the melted butter mixture.

Stir the butter mixture into the dry ingredients.

Place tablespoons of the mixture onto the oven trays; allowing room for spreading.

Loosen while warm then cool on racks