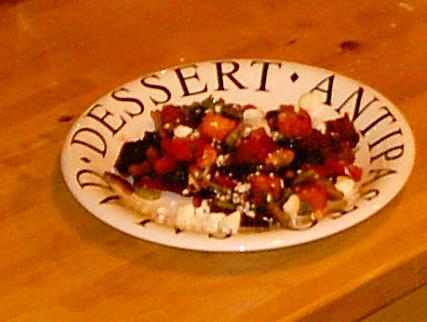 NOTES: Beets stain. Everything. Your hands, your clothes, your wooden cooking utensils. And each other, which is why they're kept separated prior to serving – so the golden beets stay golden. Otherwise, they're very simple vegetables to prepare. You can even roast, peel, and cube them up to a day ahead. In fact, just about everything in this salad can be prepped ahead of time, then assembled at the last minute.

You might not notice any oranges in this photo, because I used Blood Oranges, which I happened to have on hand. But ordinarily, they'd stand out bright against the red of the beets and the white of the hazelnuts.

Place all beets into a metal pan.

Drizzle with 3 tbsp olive oil; sprinkle with salt and pepper and toss to coat.

Cover pan with foil and roast beets until tender, about 1 1/2 hours.

Peel beets, cut into 1/2" cubes, and place in a large bowl, each color on opposite side; sprinkle with salt and pepper.

Cut all peel and pith off oranges.

Season dressing to taste with salt and pepper.

chelosunny
BTW, the best greens in the world are those from the Golden Beets. At the farmers market you can usually get them for free because the farmers cut them off as the customers don't want them and don't know what they are missing out on!
chelosunny
I am making a beet, orange and fennel salad with a raspberry vinaigrette. It is a Mollie Katzen recipe. I have made it before. We are going to a potluck with the directive to bring something colorful!
demartino
Color doesn't have much bearing on taste - if you can't find golden beets, don't worry about it. It's purely a visual. But beets are available in a range of colors, from deep red to pale white, and there's even a candy cane beet - look for them at farmers' markets.
thegoddessmelissa
I... Love... BEETS. I have a recipe for them, too. And you can buy Golden Beets at my local Meijer, which is generally where I shop for produce because they have a great selection. We don't have a Whole Foods here in Indianapolis yet (but one is coming!), but I would imagine they would have them?
queenietwo
Hi Jason - I love beet salad. Never seen golden beets in our supermarkets. Do they taste the same and are just a different colour? I'd love to try this if I could get them. Marlene