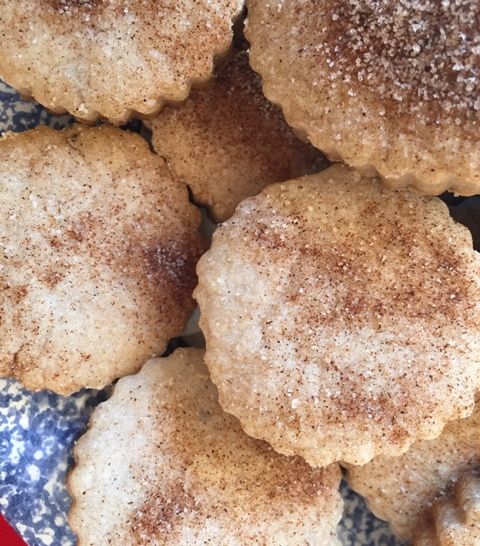 "This is a handed down recipe from my paternal grandmother Lucille Angela Hinojosa Muniz-Lira, they remind me of my childhood and Christmas time at her home in Fort Collins, Colorado."

Biscochitos or bizcochitos are a crisp lard- or butter-based cookie, flavored with cinnamon and anise (if desired). The name is a Spanish diminutive form of bizcocho. The dough is rolled and traditionally cut into the shape of stars and crescent moons. The cookie was developed by residents of New Mexico over the centuries from the first Spanish colonists of what was then known as Santa Fe de Nuevo México. The recipe for making the cookie has been greatly influenced not only by local and indigenous customs but also by recipes brought to New Mexico by immigrants from other Hispanic countries. Biscochitos are served during special celebrations, such as wedding receptions, baptisms, and religious holidays (especially during the Christmas season). It is commonly served along with hot chocolate. The cookie is seldom known outside the boundaries of the original Spanish province, although Spanish speakers may recognize the association with bizcocho, from the name, and may have some idea of what they must be, even if they have not encountered them before. https://en.wikipedia.org/wiki/Bizcochito

3.5 cups of flour
1 cup of sugar
1 cup of brown sugar
1.5 cup of butter or margarine
2 Eggs
1-2 teaspoon Vanilla
Pinch of Salt
1 teaspoon Baking Powder
2 teaspoons Cinnamon
"A little" Milk to make dough soft and to mix the ingredients.
Note - You can add 1 teaspoon Anise (if desired - this is traditional but not in my Grandma Lucy's recipe)

Combine all the ingredients until soft