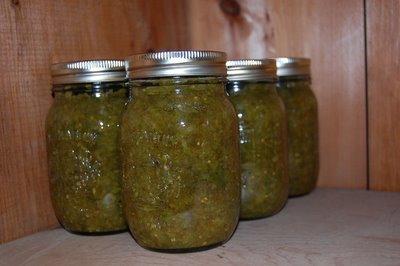 Note that this is one spicy relish recipe, not in terms of heat but flavor. If you are looking for a more mild taste you could cut the spices by half or more, I wouldn't cut the mustard seed down though, it is more for texture then flavor.

Start by using a food grinder to grind up the cucumbers, peppers & onions. I placed the grind so it overhung a colander which was placed on a deep sheet pan. This way the juice will drain as you are grinding and makes for much less cleanup. It is best to do one vegetable at a time and you will need 10 cups cucumbers, 3 1/2 cups peppers & 2 cups onions.

Once everything is ground up place all the vegetables in a colander and add 1/2 cup pickling salt & 1 tablespoon of turmeric and stir very well. Let this sit for 3 hours in the sink.

After 3 hours rise well to remove the salt, flush about 2-3 times its volume. When it is rinsed I then used a salad spinner as I did with the raw sauce to remove the excess water. Again you could just press the water out within the colander.

Once most of the moisture is removed set the mixture aside and proceed to making the vinegar solution. This is done by combining the vinegar, sugar & spices in a deep pot and bring to the boil. Once it is at a rolling boil add the vegetable mixture, stir and remove from the heat. Now you can take a break and let the mixture sit for 12 hours or over night to marinate and get the pectins working.

After the resting period start by washing and heating your jars and sealer lids. Once they are up to temperature bring the relish mixture to the boil and then proceed to filling the jars. Once filled put the lids on, then place the jars in a canner, boil for 10 minutes once the broil is reached. Now remove the jars, placing them on a t-towel and let cool. It is best leave the jars as is once they are on the counter for at least a few hours, don't dry the lids or test the seal until they have cooled.