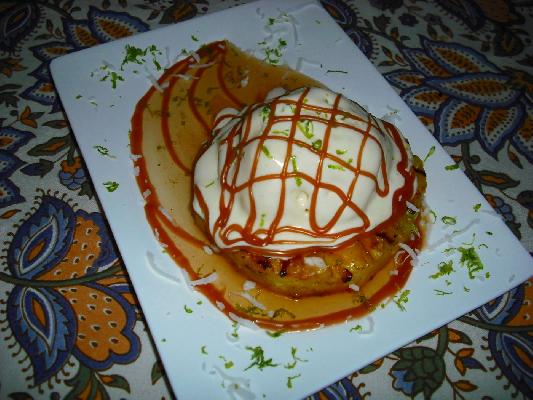 This recipe was inspired by a conversation in one of the bakespace forums where coconut ice cream and rum soaked pineapple was brought up. I am a big fan of a lot of Thai flavors. This is what I eventually came up with as a recipe.

It's sort of a French Caramel meets Thai Coconut, after passing through Jamaica and Hawaii.

I have been resisting the urge to post this until I had actually served it, but since that will be tonight, I figured it would be OK. I have already made the Ice Cream, Syrup and the Caramel sauce. Thus I kind of had a trial run last night with a slice of ungrilled canned pineapple.... It was almost where I was hoping for... I think the grilling of the fresh pineapple brushed with Ghee will make a big difference.

Combine all the syrup ingredients except the rum in a heavy saucepan over medium heat.

Bring to a boil, then reduce flame and simmer the syrup for 20 minutes.

Remove from the heat.

Remove the vanilla bean and when cool enough to handle, scrape the seeds into the syrup.

Let cool, and then strain through a fine mesh sieve.

Heat grill to medium (when you can hold your hand close to the cooking surface for a 4 count before pulling it away.)

Chop off the top of the pineapple and the top inch or so of the fruit.

Cut a slice off the bottom so the pineapple will stand upright and remain stable while you skin the pineapple.

Remove any "eyes" that remain, with a paring knife or potato peeler.

If you have a pineapple corer, use it to remove the core, then lay the pineapple horizontally and cup 4 slices about 1/2 inch thick.

If you don't have a corer, slice the pineapple first, and then remove the core from each slice with a paring knife, or a small round cookie cutter.

Brush both sides of the pineapple slices with warmed ghee or peanut oil.

Place on the grill for about 4-5 minutes per side to get nice grill marks.

Arrange a pineapple ring on each plate.

Drizzle with the spiced rum syrup.

Drizzle the ice cream and plate with the caramel sauce.

Serve with a spring of mint or sprinkle the ice cream with finely grated lime zest and sprinkle shaved coconut on the plate.