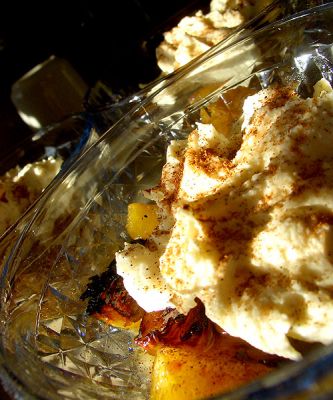 Traditionally, dessert is served after supper so I decided, since I came into a bounty of fresh pineapple and a bottle of rum, to make a fruit-based dessert. I wanted something light that would compliment the steak sandwiches that were served for supper.

This dessert is slightly sweet, slightly spicy and the mascarpone adds a nice creaminess. As I said on my blog, a nicer, more sophisticated way to enjoy dessert that not sickening sweet like cupcakes or pie.

In a small saucepan, add the rum, butter, and brown sugar. Simmer on low-heat and stir to melt butter and dissolve sugar. Keep stirring often for about 10 minutes or until sauce has thickened and reduced slightly. Remove from heat and let cool. You can make the sauce ahead of time and leave it in the refrigerator for a few days.

Cut a vanilla bean lengthwise in half and scrape the seeds into a bowl containing the mascarpone. You can scrape the using the tip of a small knife. It doesn't necessarily have to be a sharp knife just small enough to easily scrape the seeds out of the pod with little waste. Mix the vanilla seeds with the mascarpone together and set aside or store in the refrigerator if making a day ahead of time.

Heat the grill to high.

Remove the pineapple onto a serving platter. I put the pineapple into dessert cups and added 2 tablespoons of glaze to the bottom of each cup. Add the pineapple to dessert dishes, dollop with the vanilla mascarpone. Dust with cinnamon. Bobby Flay actually adds blueberries instead of cinnamon, so you can do that if you wish.