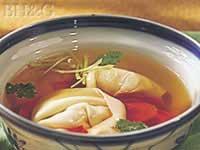 To fill wontons, place each wonton skin in front of you so 2 opposite corners are pointing toward you. Place 1 teaspoon filling in the center of each wonton skin. Fold the lower corner of the wonton over the filling and bring its point up to tuck under the filling. Roll the wonton up slightly away from you, leaving about 1 inch of skin unrolled at the top corner. Use water to moisten a side corner. Grasp opposite corner and, overlapping them over the filling, attach side corners to each other, leaving top corner free.

In a 3-quart saucepan bring 6 cups water to boiling. With a spoon place 20 of the wontons, one at a time, into boiling water. Reduce heat. Simmer for 5 minutes. (If using frozen wontons, do not thaw; after adding, return water to boiling before simmering.) Drain and rinse with cool water. Meanwhile, in a 2-quart saucepan combine chicken broth, carrot, green onion, and ginger. Bring to boiling; reduce heat. Cover and simmer for 2 to 4 minutes or until vegetables are crisp-tender. Remove ginger and discard. Stir in sesame oil. Divide wontons among bowls and ladle broth mixture atop. Sprinkle cilantro atop each soup bowl, if desired. Makes 4 to 6 servings.

Make-Ahead Tip:To freeze extra wontons, place filled wontons on a baking sheet in a single layer. Freeze until solid. When frozen, place wontons in 2 freezer bags or containers and freeze until needed, up to 3 months.