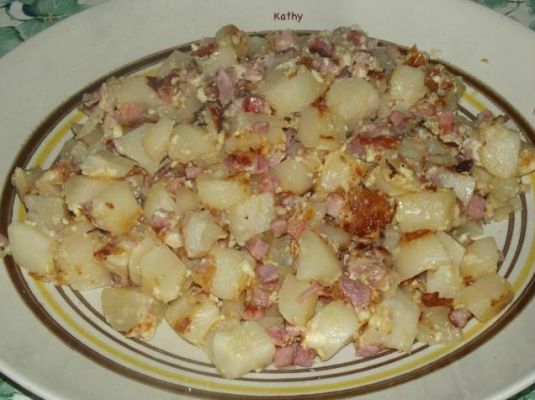 Rösti (German pronunciation: [ˈrøːsti]; often spelled Röschti in Switzerland according to the Swiss German [ˈrøːʃti]) is a Swiss dish consisting mainly of potatoes. It was originally a common breakfast eaten by farmers in the canton of Bern, but today is eaten all over Switzerland and also in many restaurants in the Western World. Many Swiss people consider rösti a national dish.

Often Rösti is simply shaped inside of the frying pan. They are most often pan fried, but can also be baked in the oven. Although basic Rösti consists of nothing but potato, a number of additional ingredients are sometimes added, such as bacon, onion, cheese, apple or fresh herbs. This is often considered to be a regional touch.

So, I was standing in the store looking right at the bags of Simply Potato Hashbrowns and when I got home, I had picked up the Simply Potato Diced Potaotes and not Hashbrowns! Oh well, my bad! :) So I have what you call an almost Rosti which I might add is very delicious!

If you've never tried Jarlsberg cheese, it is out of this world good! I call it a cousin to Swiss!

Recipe from our local newspaper, The Cincinnati Enquirer!

Beat eggs in a large bowl.

Stir in ham, 1/2 of cheese, onion, rosemary, salt and pepper.

Add potatoes and stir to combine.

Heat 1 tablespoon oil in a large skillet and pat mixture into pan.

Cover and cook 15 minutes without turning.

Remove skillet from heat and flip mixture onto a round cookie sheet.

Slide mixture back into skillet and top with cheese.

Cover and cook on low another 15 minutes or until browned.