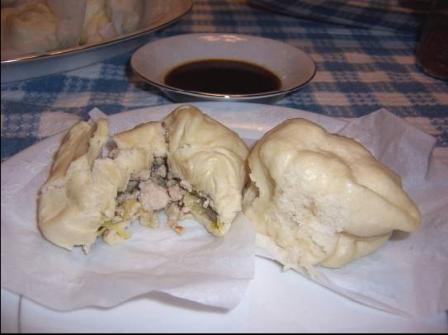 a.k.a. Steamed Pork and Vegetable Buns

These are one of the myriad of dim sum varieties. Making them is an afternoon long evolution, but the results are worth it!

The original recipe for the steamed meat and vegetable buns is from Rose Cheng's Chinese Cookery, now out of print. My mother first made the recipe for years and made her own changes, and I've also modified everything to suit myself, so it probably no longer much resembles the original recipe.

Prepare the dough so that it can rise as you make the filling.

Brown the pork in the sesame oil in a large skillet over medium heat with the ginger, sugar, soy sauce, pepper, and salt.

When the meat is browned, add the cabbage and mushrooms.

Cook until the cabbage is wilted down and the mushrooms are cooked.

Turn off the heat and let the filling cool.

Break off golf ball sized balls of the dough. Roll each one into a round about 5 inches in diameter.

Stack the rounds with a layer of wax or parchment paper between them so that they don't stick together.

Get a big pot or a wok with a steamer rack going with water gently boiling.

Hold a round in your left hand.

Fill each round with about 2 tablespoons of the filling.

Gather up the dough around the sides, pulling it up over the filling, and squish and slightly twist together.

Place the completed dumpling on a piece of wax or parchment paper (you can reuse the ones you were using before to separate the dough rounds).

When you have enough to fill your steamer rack without crowding, put them in, being careful to put them in such that you don't unbalance the steamer rack and dump them in the water.

Steam each batch for about 15 minutes or until the dough is cooked. Remove the bao and place on a platter.

Cover with a tea towel if you aren't ready to eat them yet.

Continue until all the dumplings are cooked.

Serve with various dipping sauces as desired. Hoisin sauce, sweet and sour sauce, and oddly enough Lea and Perrin's Worcestershire Steak Sauce are very good, as is the following: