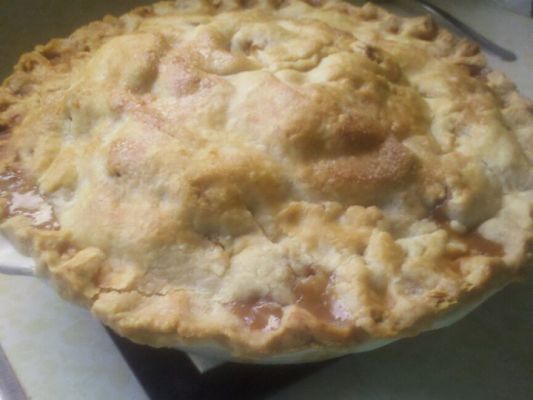 In honor of all things Autumn and our obsessive love of food, Vicky Akins once again hits it out of the park with this recipe homemade apple pie.

Apple Filling
*Northern Spy apples are my favorite for making pies. They are sweet without being overpowering.

Cut in butter chunks with short 2-3 second pulses (may also use a pastry blender or fork).

Turn mixture out into a bowl. Sprinkle with 3-4 Tbsp of ice water.

Squeeze a handful to see if it sticks together, if not, add remaining water until it does. Divide dough in half, rolling into 2 balls.

One should be slightly bigger than the other.

Flatten into circles and let rest for 30 minutes

Roll out after 30 minutes.

Use a fork to poke holes in bottom crust to prevent bubbling.

Fill and cover with top crust,pinch closed and seal with egg wash.

Add apples and toss to coat.

Pour into prepared shell, dot with small chunks of butter, and pour whipping cream over filling.

Crimp & seal edges. Brush with milk and sprinkle with raw sugar (or granulated).

Be careful when putting pan in oven so pie pan doesn’t slide.

Bake at 375 for 40 minutes, then remove foil from edges and bake for 30 more minutes or until crust is golden brown.