By Pat Denny
Member since 2015 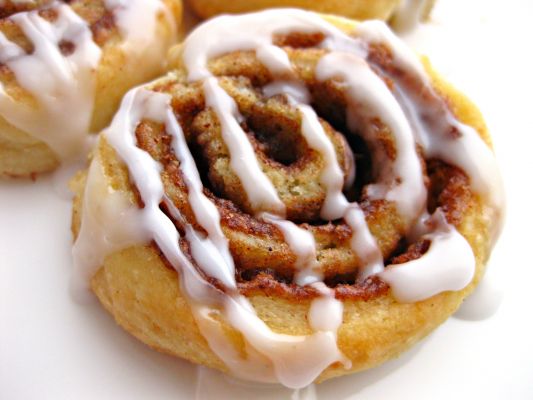 These are delicious, small cinnamon rolls that are easy to make. I have brought them to large gatherings and had many requests for the recipe. While they are probably best when eaten the same day they are baked, I have successfully frozen them to serve at a later day.

In a medium bowl, stir together brown sugar and cinnamon. Set aside.

Whisk the flour, baking powder, and salt together in a large bowl. Stir in the cream and mix until just combined (dough will be soft and moist).

On a lightly floured counter top, roll out the dough using a rolling pin dusted with flour until you have a rectangle that's roughly 12" X 7".

Smear softened butter al over the surface of the dough.

Starting at one end (one of the 7" sides), roll the dough up into a tight spiral.

Use sharp knife to cut the roll into 24 small spirals.

Place the cinnamon buns cut side up onto an 8" or 9" greased baking pan or place one cinnamon bun into each of the cups of a greased mini-muffin tin.

Bake for about 12 - 15 minutes until the buns turn a faint golden. Turn the buns out onto a wire rack to cool completely.

While the buns are cooling, make the glaze by mixing powdered sugar, milk, and vanilla in a small bowl until smooth. Drizzle glaze over the cinnamon buns and serve immediately.