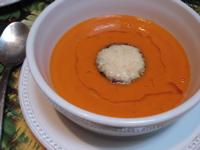 After probably the longest and hottest day of pastry class, I ran home, put my Marjolaine in the fridge, showered, then headed back to the final hour of the Union Square farmers market. When I got there it hot, sticky, crowded, and there were seemingly miles of tomatoes. Big, small; heirloom, roma, cherry; red, yellow, green; you name it they were there.

With my new lot of red treats I decided to do a couple of things:

1. Roast some of the smaller ones for use tomorrow.

2. Make a delicious homemade tomato soup! It even has a "healthy" crouton treat that will remind you of that good old grilled cheese and tomato soup that you might have enjoyed as a kid.

For the soup, put oil and garlic in pan over medium-high heat. Add your diced tomatoes, vinegar, seasonings, sauce/paste, rest of olive oil, and tabasco. Simmer for about 25-30 minutes over Medium-Low heat until tomatoes are soft and the liquid has reduced a little bit.

Remove from heat. After mixture has cooled for a couple of minutes, carefully blend in a mixer (I used the "stir" function and it was more than fine.) Be careful when mixing hot liquids, they tend to spout up...slow is best. When you've reached a nice puree, pour the soup through a strainer into a large bowl and set aside.

For the croutons, slice a zucchini or green squash into rounds about 1" thick. Brown on both sides in a pan with some oil. In the meantime shred some parmesan cheese (about 1 cup). When the rounds are brown on both sides, move to a baking sheet (you can drain on a paper towel first if you want). Top each "crouton" with shredded cheese and bake in the oven at 350 F until melted.

Serve tomato soup with crouton in the center cheese side up; drizzle fresh olive oil (an herb flavored olive oil or regular, either works) around the crouton. We added extra croutons...they were so good!