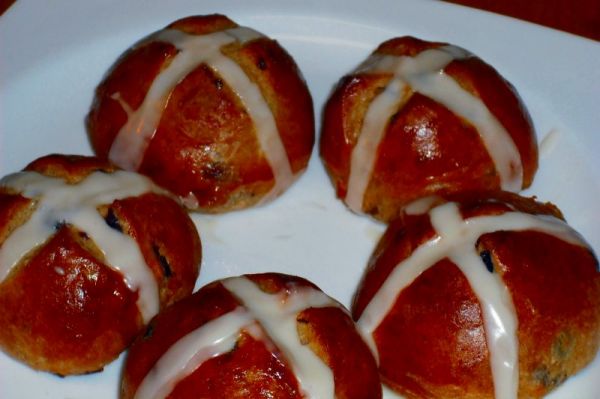 An Ostara necessity, symbolizing the 4 quarters of the moon. Granted, I am a little late for Ostara, but these have also become a staple for Good Friday, being marked with a cross symbolizing the crucifixion, as well. The term "Hot Cross Buns" does not appear in print until 1733. However, this spiced, fruited, rich, yeasted sweet bun can be dated back, not only to the pre-Christian Saxons of Britain, but as far back as the ancient Greek, Roman and Egyptian religious celebrations. Bread seems to be a common theme running through the ages.

As a side note, it is good luck to share your bun with a friend, following the old adage "Half for you and half for me, Between us two shall goodwill be".

In a large mixing bowl, combine 1 1/2 cups flour with the yeast and cinnamon.

Remove from heat and beat for 3 minutes at high speed with an electric mixer.

Add all at once to the flour mixture along with the eggs.

Beat at low speed with an electric mixer for 1 minute, scraping sides of bowl constantly.

Stir in currants, and as much of the remaining flour as possible.

Turn dough out onto a lightly floured surface and knead in enough of the remaining flour to make a moderately soft dough that is smooth and elastic. (the grand total of flour this time was only 4 cups)

Shape into a ball and place in a lightly greased bowl, turning once to coat the surface.

Cover and place in a warm spot to let it rise until double, about 1 1/2 hours.

Punch dough down and turn out onto lightly floured surface.

Cover and let rest for 10 minutes.

Divide dough into 16 pieces and form each into a smooth ball.

With a sharp knife, cut a cross in each; brush tops of each bun with some of the slightly beaten egg white (reserve the remainder).

Add more milk as necessary to give it a thick pouring consistency.

I have to use a squeeze bottle, because I am too much of a spazz to be able to pour from the pitcher.

Let the icing dry and then chow down!