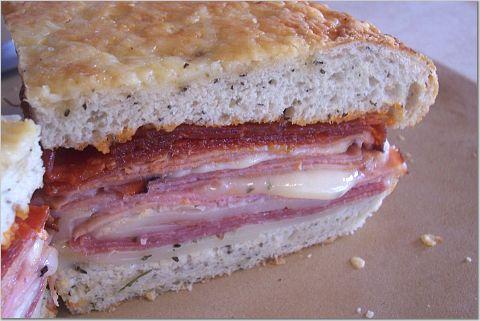 I was expecting company and was looking for something more than just a sandwich for lunch. I came up with this idea and threw it together. Everyone loved it and my husband told me that he will be requesting for me to make it again!

All the ingredients are to your desired liking. It you like lots of meat and cheese then stack it as high as you want. :)

Thank's to the Nesties's for helping me come up with the name. :)

Cut loaf of bread in half and sprinkle both halves with parmesan cheese.

On the bottom half of the bread: arrange the pepperoni, then add some parmesan cheese and mozzarella cheese and 1/2 of the ham.

On the top half of the bread: Sprinkle with some parsley and oregano. Arrange the salami, then add some parmesan cheese and mozzarella cheese, and the rest of the ham.

Top each half with parmesan and mozzarella cheese and place into preheated oven. Cook for 10 minutes or until cheese has begun to melt and the meat has warmed. Turn on the broiler and broil until the cheese starts to brown. Remove from the oven, slice and serve immediatly.