How to Make Vanilla Extract 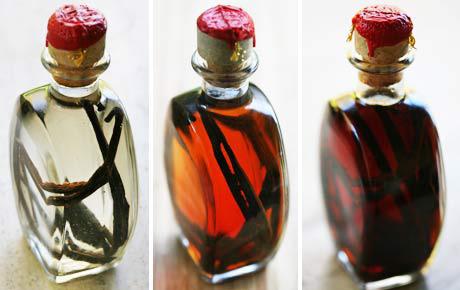 Why make your own vanilla extract? Well let's see. It's easy to make. You'll never run out of vanilla again. It might even be economical, given that you'll never run out of it. It's fun to watch the extract change colors? I don't know. Sometimes we just make things for the heck of it. In this case, Garrett gave me a dozen or so vanilla beans, sharing what he had been given by this generous company. Vanilla beans are produced in several countries, and Garrett has a good write-up on his site regarding the differences between the varieties - Madagascar, Bourbon, Tonga, Mexico, Tahiti, etc.

Did you know that each vanilla bean comes from an orchid that has been pollinated by hand? Once the vanilla seed pod has developed, it must be hand picked as well. After picking the curing process takes several months. So if you've ever wondered why vanilla extract, and especially vanilla beans, can be so expensive, this is why.

Commercial vanilla extract usually has simple syrup (sugar water) added to the extract to give it a sweet aftertaste. You can do this if you want, but if you are using the vanilla for baking, there really is no need.

1 Use kitchen scissors or a sharp paring knife to cut lengthwise down each vanilla bean, splitting them in half, leaving an inch at the end connected.

2 Put vanilla beans in a glass jar or bottle with a tight fitting lid (mason jars work well). Cover completely with the vodka.

3 Give the bottle a good shake every once in a while. Store in a dark, cool place for 2 months or longer.

Lasts for years. You can keep topping it off with vodka once in a while as you use it, just remember to give it a good shake.

You can also make vanilla sugar by putting a split vanilla bean into a jar of white, granulated sugar. Great way to infuse the sugar with vanilla flavor for baking.