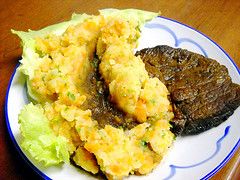 In 1574 the city of Leiden in the Netherlands was being sieged by the Spanish army. The Spanish tried to starve the citizens in order to capture the city. Just at the point that food supplies were gone, the Dutch army came to the rescue. When the Dutch army entered the city on October 3rd, they only found a small pot of potatoes, carrots, onions and scraps of meat, and nothing else to eat. Since then the citizens of Leiden celebrate their liberation by eating potatoes, carrots, onions and meat on October 3rd, and it came to be called “hutspot” .

Hutspot is eaten all over the Netherlands during wintertime, but only in Leiden it is a traditionally must have on October 3rd.

1 Bring the water with some salt to the boil, put the beef in it and simmer softly for 75 minutes

2 Add the carrots and cook for another 15 minutes

4 Boil everything softly until almost all of the liquid is cooked away (30-35 minutes), if necessary add a little water, but make sure it doesn’t become too moist

6 Mash the potatoes, carrots and onions and add salt and pepper to taste

7 Put the slices of meat on top of it and serve with gravey and mustard at he side.

Another way is cooking the potatoes, carrots and onions with the bay leaves pepper and salt and simply serve with a meat stew or meat balls with gravey at the side