By andromeda
Member since 2007 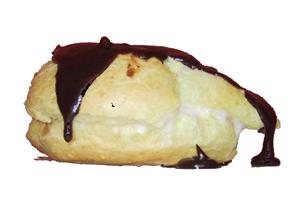 It is believed that the custom of bun day came to Iceland from either Denmark or Norway in the second half of the nineteenth century, introduced by bakers from those countries. Nevertheless, bolludagur is celebrated quite differently in Iceland than in the mainland Scandinavian countries. There are two important things related to the bun day. The first is to spank people with the so called bolludagsvöndur, which is a decorated stick, and today most kids make their own sticks in school, decorating it with all kinds of colored paper. The goal is to manage to spank people before they get out of bed, and receive a price, which in Iceland is always rjomabolla, a cream bun.

Heat 300ml Water with 100g Butter in a pan. When the Butter has melted set aside and ad 2 dl Flour and stir until shiny and smoothy.

then put 3 small eggs, once at a time and stir well.

put on a baking plate with a spoon an bake until golden for ca 30 minutes.

taka out and cool.

melt some choclate and put on top, when the choclate is hard you can split them and put some strawberry marmelade and whiped cream inside.

then start spanking so you can eat one too ;o)