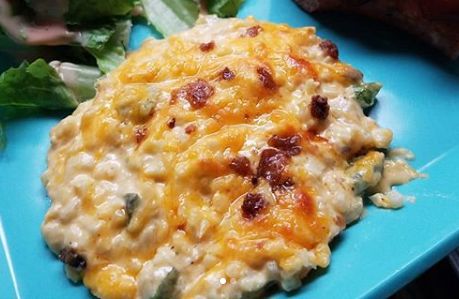 Heat up a large frying pan over medium high heat and add in 6 strips of bacon. Cook the bacon while preparing some of your other ingredients.

Break up 1 medium head of cauliflower and chop up just the florets (or buy pre-packaged). Do not mince these too finely, we don't want cauliflower rice. Instead, we want it to be kind of chunky, like the texture of macaroni shells.

Cover the cauliflower with some water in a microwave safe dish with a lid on it and cook on high for about 10 minutes to tenderize (or steam based on package instructions if using pre-prepared).

Shred 2 cups of cheddar cheese and de-seed the jalapeno.

When the bacon is fully cooked to crispy, remove it from the large frying pan, but retain the drippings in the pan.

Add the diced jalapeno to the frying pan and stir quickly to try to coat it evenly in the rendered bacon drippings. Saute and stir about 3 minutes until tender, then remove from the pan and set aside.

In the same large frying pan, add in 1 cup heavy cream and 4 ounces of softened cream cheese. Stir together a couple minutes until well blended.

Sprinkle in about 1 cup of shredded cheddar cheese and stir until melted.

Add in the strained and cooked cauliflower, half the cooked bacon (diced), and the jalapeno. Stir to incorporate the sauce evenly with the ingredients.

Top with the remaining shredded cheddar cheese and cover with a lid to simmer for about 5 minutes (or until the cheese has melted). You can also put it under the broiler until bubbly and crispy.

Remove from the heat and serve as an entree or as a side dish with another meal.