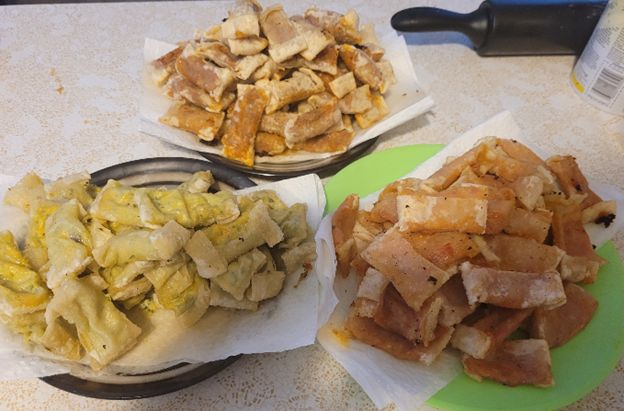 Growing up, I would eat pizza rolls by the dozen. They were my favorite frozen guilty pleasure, and I could never get enough of them. Of course, as I grew older and moved on to “higher cuisine”, pizza rolls became that thing I would always buy “for someone else” and eat when nobody was looking. But you know what I don’t like? How somewhere along the line, most frozen pizza rolls gave up using real cheese and instead use imitation cheese. This I could not stand! So, I knew I had to somehow bring back the taste of what a “good” pizza roll should taste like without getting too fancy. After many iterations, this is what I have come up with and I think it is pretty close to the mark.

One thing I will say – I have tried to make this healthier by baking the pizza rolls instead of frying them. No matter how I try to bake them, they do not come out the same. This isn’t to say that I won’t occasionally bake them if the wife has guilted me into agreeing that I have eaten too many fried foods – but let’s be honest, nobody is going to ever serve up pizza anything and claim it’s a health food.

I have also included two other popular variations in my house. I have served these to a lot of guests over the years for parties, and I can honestly say that these three variations are evenly split for which people deem “the best”.

Leave the seeds or remove the seeds accordingly to personal preference. If you wish for a spicier pizza roll, replace as many poblanos as desired and replace with 2 jalapeno peppers for every poblano removed.

Take the peppers, cream cheese, and cheddar cheese and put into food processor.

Pulse until peppers are in small enough pieces to fit into a wonton wrapper.

Place wonton wrapper onto assembly area. Wet the outer edge of the wrapper with water. I generally have a small bowl of water in my assembly area and use that to just trace the edge.

Take a small spoon of filling. I generally use half a kitchen spoon. It may not feel like a lot, but it goes a long way. Place the filling on one side of wonton wrapper, leaving room on the sides. Roll wonton wrapper and seal it. Fold in the sides of the wrapper on the side with the seam and press firmly to make sure it sticks. Repeat until filling is depleted.

Heat oil until it is around 300 degrees if using a deep fryer or thermometer. Fry rolls in batches of 6 for about 3-5 min or until browned. If rolls start to burst, remove immediately.