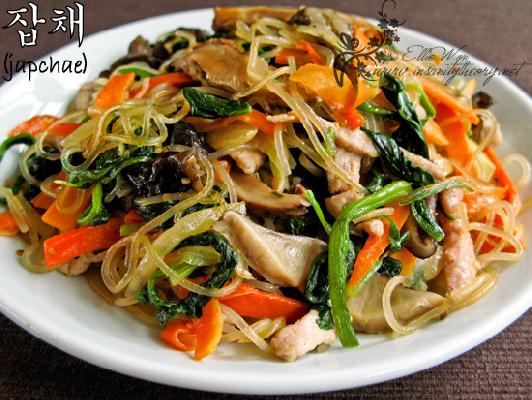 This dish is made with sweet potato starch noodles (which are low GI), and with a variety of veggies - this beautiful and tasty dish is a wonderful treat to make!

NOTE: To make a vegetarian/vegan alternative, replace the pork with firm tofu which has been drained/pressed and sliced into thin strips. Pan fry the strips in a little oil till they are firm and brown, then mix them through with the pork marinade and set aside till step 5.

1. Mix together the pork marinade and massage into the pork, then set aside to rest for 10 minutes. Meanwhile, set a pot of water to boil, then blanch the spinach for 1-2 minutes before quickly removing and refreshing in ice water (this helps them regain their bright verdant colour), then setting in a large strainer to drain.

3. Heat a little light/mild olive oil in a frying pan, then add the strips of carrot and stir-fry till barely cooked - they should have a bit of tenderness but retain a kernel of crunch in the centre. Remove the carrot, then add the marinated pork to the pan and fry till browned and cooked through. Set aside.

4. Set another large pot of water to boil and cook the sweet potato starch noodles till al dente, then rinse in hot water and drain (unusual, but I find that rinsing them in cold water makes them take on a lot of moisture). While the noodles are draining, chop the blanched spinach into smaller pieces then use your hands to squeeze out as much moisture as possible - make sure to work in small batches as you’ll be able to squeeze out more water that way.

5. Get a large mixing bowl, then add the drained noodles and all the other ingredients. Mix together the noodle dressing then pour it over the bowl and use your hands to lightly yet thoroughly toss it through. Once is has been well mixed together, give it a taste - if it tastes too sweet for you, add another tbsp of light soy sauce, and if you find it too salty, add another tsp of caster sugar.

6. Serve warm, over rice or as a banchan/side dish

homemade5
I love this type of food! But, what is dried cloud-ear fungus or wood-ear fungus? And where do I get it? Is it a very important ingredient,or could I leave it out?
seafoodlover
mmm this sounds delish!
thegoddessmelissa
YUM. I love glass noodles! I'm totally going to make this, but I have to go to Asia Mart first because all I have right now is soba and udon!