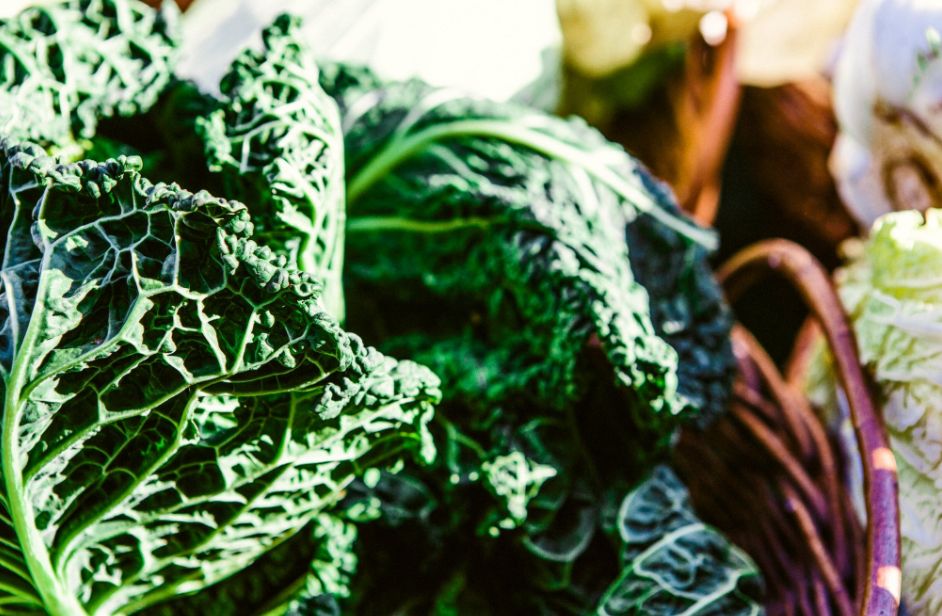 "The UN declared that Kimchi is one of the top 10 foods of the world. We agree!"

I was introduced to Kimchi at a Korean eatery in NY. I really enjoyed the pungent flavor and researched how it is made traditionally. Then we began to make our own at home.

Take the two Napa Cabbages and
cut them both in half-length wise. Then take each half and cut it in half again, giving you four quarters. Cut off the hard “base” ends, then cut all the cabbage into about 1.5 inch pieces. ( they will shrink later to be quite perfect in size)

Take a BIG bowl ( we have two large plastic storage bins that we use for this, each is 18 quarts) and layer the bottom with the chopped cabbage. Now take a good handful of the Sea Salt and sprinkle liberally all over the cabbage. Then lay down a second layer of cabbage and again salt that. Go layer by layer until all the cabbage is in the bowl and very well salted. Then using your hands, press down on the cabbage to squeeze it down to the bottom of the bowl.

The salt will do several things. It will draw out a ton of water from the cabbage, making it considerably smaller. It will become a preservative, and it will promote the growth of the good bacteria found inside the cabbage. About every 30 minutes give the cabbage a good toss and then press down on it again compacting it. You will see a considerable amount of water in the bottom of your bowl or bin. Tilt your bowl and drain the excess each time. Let this sit for about 1.5 hours, turning every 30 or 40 minutes.

When the cabbage is good and wilted to where even the wide “white” parts are “bendable soft”, take it over to the sink and get ready to wash. This is the biggest pain in the butt about Kimchi. We need to get EVERY trace of that salt off the cabbage. I Put several handfuls at a time in a huge colander and spray it and mix it really well in the sink. Then I put that rinsed cabbage in my second big “bin” and rinse another few handfuls. Do this until all the cabbage has been well rinsed. Then, DO IT AGAIN. Take that bowl of freshly rinsed and run it through again. When that’s done, DO IT AGAIN.

Now we’re going to work on your “porridge”. This is going to be a wet blend that we will eventually want to mix on every piece of our kimchi cabbage. Your porridge or wet mix is the thing that will be blended into every piece of your veggies. For this, it is VERY important to use a food processor or a blender. I’ve used both and the food processor wins, hands down.

Let that sit there until we get our rice porridge going.

Stir about 1/3 cup of sweet rice flour into 2 cups of water in a suitable pot. It blends better if the water is cold. Then put it on medium-low heat stirring frequently. Eventually it will be well blended. Keep the heat on until it turns translucent, and a bit thicker. About 5 minutes total.

Let this cool to room temperature. Warm is okay, Hot is not

When it’s pretty cool, we’re going to start the Processor. Put the lid on your processor which already has the garlic, apple, onion, and ginger in it, and hit the chop button. Once it’s pretty well chopped up, now we’re going to add some of the Rice/water mix. Here’s the problem. We are NOT going to use it all. So, how much? Well, I only add enough that when I’m done doing the puree, I have a thick creamy mix. The last batch I made, I used about 1 full cup. Anywhere from 1 to 1.5 cups will be fine.

Now once you have your cup or so of rice/water mix in the processor, add the ¼ cup of sugar and BLEND this well. Let that processor sing…chop all that into a fine puree. When it’s good and chopped you’ll have a creamy thick “soup”. Perfect. Let it sit there in the processor until we need it.

Cut a large Korean radish In half Lengthwise. Then slice one half into thin pieces like you might be making thick potato chips. When it’s all sliced into chips, then slice those chips into juliennes. A good cut will leave you with a piece of radish about 1.5 inches long and about an 1/8 of an inch thick. Think of it like a skinny French fry. Place your sliced radish in your second “big bowl”. At this point one big bowl has your cleaned cabbage, the other was empty. Use the empty one.

Julienne your two carrots. You’re looking for the same effect, “short thin French fries” of carrot. Toss them in the big bowl with the Radish.

Chop your green onions (scallions) into about ½ inch pieces, green tops and all. Toss them in the big bowl with the radish and carrot.

Chop your Chive bunch into ½ inch pieces. Toss them into the big bowl with the radish, carrot, and green onion

Now the FUN begins! I ADVISE that you use rubber gloves for this folks. You’re going to get messy and probably stained red from the pepper flakes. I use disposable “exam” gloves and wash them well first

Take your porridge from the processor and pour it all over the carrots, radish, cloves and green onion in the bowl. Then pour your half a cup of red pepper flakes on the porridge. Now with both hands, get in there and mix all that stuff together for a good 2 – 3 minutes. It should be one fairly thick, red mess!

Finally, bring the bowl with the cabbage in it over. Take about a third of the cabbage and put it in the porridge /radish/green onion/chive mix bowl and coat every bit of the cabbage with the mixture. Then some more cabbage and finally the rest of it. Mix it with your fingers, “mush” the stuff around. We want ALL the cabbage to be coated with an even coating of “red”, the color of the pepper

Place the cover on your tub of Kimchi, OR spoon it into Mason Jars If you use mason jars, leave at least an inch of head space for expansion

Set the tub or jars in a cool area of the house for 2 days. The fermentation will begin quicker at room temperature

After two days, you can move it into the refrigerator and slow the fermentation, as the longer it ferments the "more sour" it becomes.

Use Kimchi as a side dish to anything you like to eat. You can even add it to soups, or eggs in the morning. It is very versatile. We’ve used it as a topping for hamburgers. But our favorite is a side dish alongside our regular dinner.