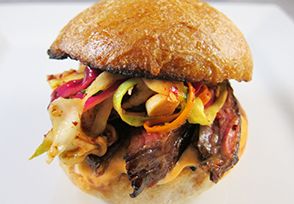 This recipe reminds me of my Korean roots and heritage because Korean BBQ flavors is very aromatic, and whenever I’m having friends over I like to make Korean style burgers. It represents my Korean culture and the flavors I grew up with, and also how American culture influenced me. It seems very natural for me to want to combine Korean BBQ with burgers since it's my two favorite foods and I also because I'm half Korean and half American.

Typically Korean BBQ is made with rib meat or “galbi” in Korean, but sometimes it’s not always available in the American grocery stores, so I used skirt steak instead and instead of eating it with rice and kimchee like most Koreans like to do I placed it in between buns with spicy slaw and mayo.

1. Marinate the skirt steak in Korean BBQ for at lease1 hour.

2. For the spicy mix together the red onions, cabbage and carrots. In a separate bowl whisk the rice wine vinegar, brown sugar, soy sauce, chile flakes, and sesame oil. Pour the vinegar mixture over the cabbage mixture and sprinkle the sesame seeds on top. Set aside for 30 minutes.

3. For the spicy mayo blend with the sircha sauce

4. On a hot grill cook the skirt steak for 1 minute on each side or to desired tempature. Set aside for 2 minutes before slicing and placing on buns.

5. Toast the hamburger buns on the grill.

6. Spread the mayo on the buns, and place Korean skirt steak with the spicy slaw mixture on top.