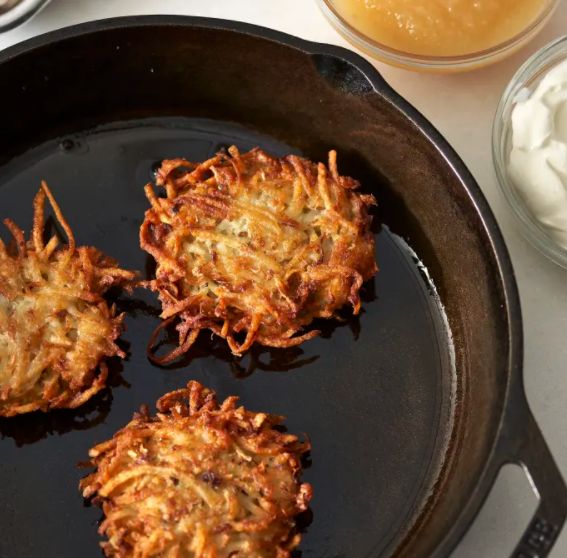 Make ahead: Latkes are best made and served right away. They can be fried and kept warm in a 200°F oven for up to 30 minutes.

Storage: Refrigerate leftovers in an airtight container and recrisp in a 300°F for 5 to 10 minutes. Keep a close eye on the latkes when reheating so they do not burn.

Doubling: The recipe can be doubled, although you will need an extra sheet of cheesecloth to squeeze the extra potato and onion shreds. The oil (and schmaltz, if using) will need to be replaced halfway through frying. Pour the used oil into a heatproof bowl, wipe out the skillet, then heat fresh oil and continue frying.

Prepare the potatoes. Scrub the potatoes well, but do not peel. Cut each potato in half crosswise.

Toss the latke ingredients together with your fingers. Add the potatoes, onion, eggs, matzo meal or breadcrumbs, salt, and pepper to the bowl of starch. Mix with your fingers, making sure that the potato starch breaks up and is evenly distributed with the rest of the ingredients. Set batter aside for 10 minutes.

Heat the oil. Place the oil or schmaltz (or a combination of the two) in a large skillet so that when melted there is a depth of 1/4 inch (for a 10-inch skillet you'll need 1 cup of melted oil/schmaltz). Heat over medium-high heat until a piece of the latke mixture sizzles immediately.

Form latkes one at a time. Scoop 1/4 cup of the mixture onto a fish or flat spatula. Flatten with your fingers to a 4-inch patty.

Drain the latkes. Transfer the latkes to a paper towel-lined baking sheet to drain for 2 minutes.