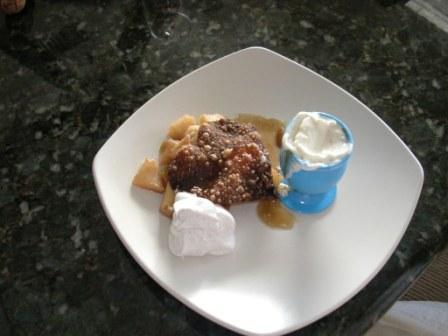 This recipe is something I just sort of imagined in my head. I also call it my lazy apple pie. It looks fancy and sounds complicated, but it is a sure way to impress your friends with minimal effort!

First, I'll list all the ingredients for you (duh) but then as I go into the directions I'll take you step by step. It's not so linear, so read the directions first to get a feel for what to do. And if another way seems easier to do, then do it! I won't take it personally, I swear.

Bring a quart saucepan to medium heat . In a bowl, mix all the filling ingredients, except the butter, until coated. Add the butter to the saucepan and then add the filling. Stir around and make sure it doesn't burn or cook too quickly.

Then, as the filling continues to cook, start the rum caramel sauce. In a small saucepan, heat up the rum and the brown sugar until the sugar dissolves and add the butter. Continue to cook the sauce on medium low heat until reduced by half. It should be done by the time the filling is done.

Check the filling again and stir around.

While the filling continues to cook, fry the wonton wrappers in the heated oil in a deep skillet until golden brown. Remove them with a slotted spoon as soon as it turns golden brown and place them on paper towels to drain. Sprinkle them with cinnamon sugar immediately. As you can see in my picture, the crust was a little TOO brown since I let it fry for too long! But I'm sure you'll avoid the same mistake!

The filling is done when they apples are tender and the raisins and cranberries have plumped.

Divide the filling among 4 plates. Place a wonton wrapper "crust" on top of each filling. Put a dollop of cinnamon whipped cream on each "pie" and serve with a bit of vanilla bean ice cream. Drizzle the rum caramel sauce over the pies and garnish with a sprig of mint. ENJOY!