Leek And Potato Tart With Gruyere

By kathyk
Member since 2006 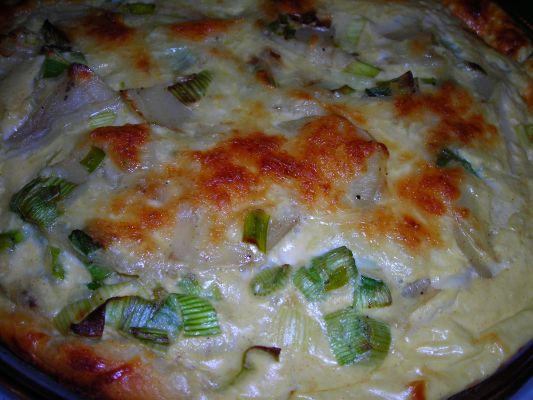 This a fairly simple dish that could be modified many ways. I used Kroger shredded swiss cheese and refrigerated pizza dough as I could not find breadstick dough. The only problem I had with that was the dough would not stick up the sides of the pie plate. No matter, it still cooked up well and I was able to remove it from the pan with litte trouble. I also added some leftover green onions to the leeks. Some chopped bacon or ham would also make a nice addition, as well as some finely chopped broccoli. It would make a good brunch dish. The only thing I would watch for next time is the potatoes. They were still a bit firm in the end product. I will either have to suck it up and buy a mondoline to slice thinner or maybe sautee them in the pan longer.

Unroll dough, separating into strips. Let rest 5 minutes. Working on a flat surface, coil one strip of dough around itself in a spiral pattern. Add second strip of dough to end of first strip, pinching ends together to seal; continue coiling dough. Repeat procedure with remaining dough strips. Let rest 5 minutes. Roll into a 13-inch circle; fit into a 9-inch pie plate coated with cooking spray. Fold edges under; flute.

Place the milk, egg substitute, cheeses, and mustard in a blender, and process until smooth. Pour milk mixture over leek mixture. Bake at 375° for 40 minutes; let stand for 10 minutes