By Ashlie
Member since 2015 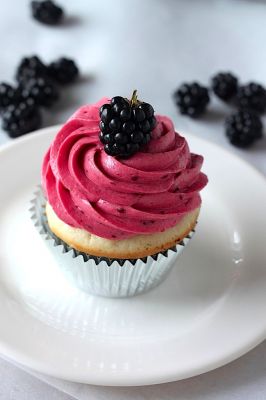 2) In a medium bowl combine flour, baking powder, and salt; mix well to combine. Set aside.

4) In a small bowl combine sugar and lemon zest. Using your fingertips, rub the zest IN to the sugar, until fragrant and well combined.

5) In a large bowl or stand mixer fitted with the paddle attachment beat melted butter and sugar on medium speed until well combined; about 2 minutes.

6) Slowly add the flour mixture to the butter/sugar combination, beating until just combined. Add in sour cream/milk/egg combo and beat on low until *just combined. Over-mixing will result in a dryer/denser cake.

7) Divide the cupcake batter evenly into the 12 molds, then place the pan in the oven. 8) Bake for about 16 minutes, or until a toothpick inserted into the center of a cupcake comes out clean. Allow cupcakes to cool completely before topping with frosting.

For the blackberry buttercream:

1) Combine the blackberries and lemon juice in a small saucepan.

2) Bring to a simmer over medium heat, and stir constantly until blackberries have become soft enough to mash effortlessly. It will look like blackberry jam.

3) Once the mixture can coat a spoon (you will have about 1/3 cup of blackberry puree) remove from heat.

4) Place a fine-mesh strainer over a small bowl and push the puree though, leaving any seeds/large chunks behind. Allow mixture to cool completely before using.

When ready to make buttercream:

1) Place butter and cream cheese in a large bowl, or in the body of a stand mixer.

2)With a handheld mixer, or with the whisk attachment on your stand mixer, beat butter on medium-high until completely smooth; about 1 minute.

3) Add in the blackberry puree and beat until completely combined.

4) Add in the confectioners sugar, one cup at a time, on low speed.

5) Once all of the sugar has been added, add in the cream, then beat on high-speed for 1-2 minutes, or until light and fluffy. Ice cupcakes as desired.

*Cupcakes can be made up to 6 hours ahead of time, but be sure to store in the fridge and bring to room temperature 30 minutes before serving*