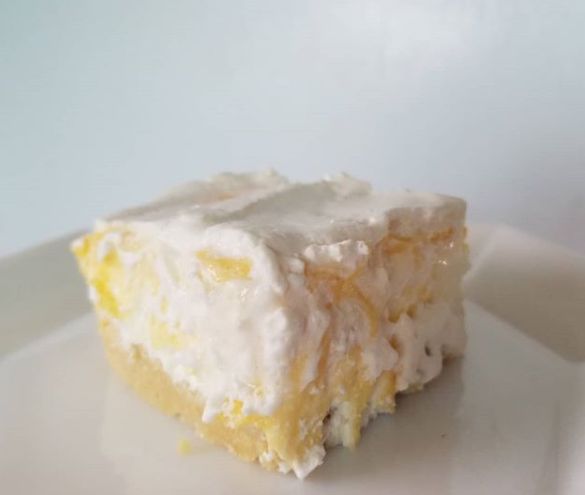 Recipe from This Mom's Menu

Preheat oven to 350 and grease an 8x8 baking dish with nonstick spray.

First, prepare the crust. In a large mixing bowl, combine the butter and sugar substitute. Beat with an electric mixer until well-combined and fluffy. Add the vanilla and egg and mix again. Next, add the almond flour and salt and mix until everything is incorporated.

Transfer to the prepared baking dish and spread into an even layer. Bake in the preheated oven for 10-15 minutes or just until the edges begin to brown. Once it is finished baking, set it aside to completely cool before assembling the dessert.

While the crust is baking, prepare the lemon layer. In a medium mixing bowl, cream together the butter and sugar substitute with an electric mixer until light and fluffy. Add the eggs one at a time, while mixing on low speed, then add yolks. Continue to beat on low for another minute or two. The mixture should be smooth and creamy. Add the lemon juice and continue to beat on low speed until incorporated. At this point you're going to think that I have lead you astray. The mixture will be lumpy and broken, but keep going.

Transfer the mixture to a medium sized saucepan and place over low heat. Whisk until mixture is heated through and no longer has a curdled appearance. Increase the heat to medium and stir constantly, using a rubber spatula to scrape the bottom and sides of the saucepan, until the mixture thickens to a pudding-like texture.

Transfer the mixture to a dish and place it in the fridge to cool before assembling the dessert.

Prepare the whipped cream layer by combining the heavy cream, powdered sugar substitute, and vanilla in a large bowl. Beat with an electric mixer on high speed until the mixture has nearly doubled in size and formed stiff peaks.

Chill until ready to eat.