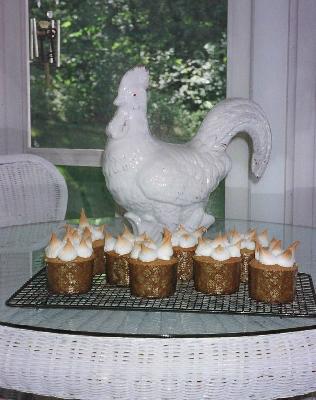 Notes: I use 2.75"x2" pannettone baking cases placed on a baking sheet instead of the usual cupcake pans.Makes 10 jumbo cupcakes

Sift the flour, baking powder, baking soda, and salt into a medium bowl and set aside.

In your mixer on medium speed, beat the eggs and sugar till thickened and lightened to a cream color, about 2 minutes. Stop the mixer and scrape the sides of the bowl as needed during mixing. On low speed, mix in the oil and vanilla till blended. Mix in the sour cream. Mix in the flour mixture till it's incorporated and the batter is smooth.

Pour into prepared cups and bake 23-25 min., till toothpick inserted in center comes out clean. Remove from oven and let sit in pan for 10 min. Remove from pan and cool completely before frosting.

Reheat the oven to 325º. Using a grapefruit spoon or serrated knife, cut a cone-shaped piece about the size of a heaping tablespoon out of the middle of the top of each cupcake. Fill each cupcake with the lemon curd. Spread curd out evenly till it's flush with the cupcake. (You can discard centers or eat them!)

In a mixer on low speed, beat the egg whites and cream of tartar till whites are foamy and the tartar dissolves, about 1 minute. Beat on medium-high speed till soft peaks form. Then adding sugar slowly, beat until the whites are stiff and shiny.

Place cupcakes on baking sheet. Place large star tip in a pastry bag. Add the meringue. Pipe out one star in the center of the cupcake - squeezing, pulling upwards and releasing quickly, giving you a nice long point. Do this five times around the center star.

Place baking sheet in oven and bake for 15 minutes till lightly browned. Cool cupcakes for 1 hour, then refrigerate for at least two hours.