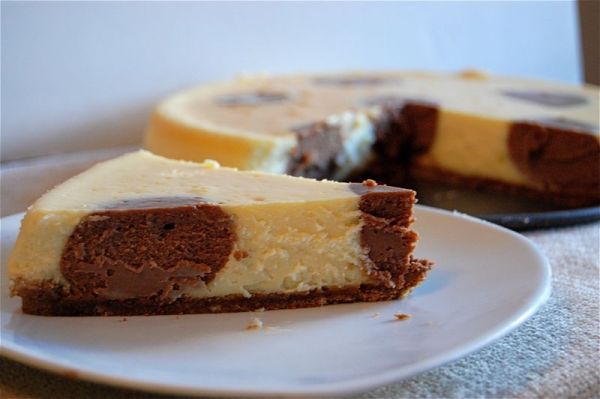 This cheesecake is not only adorable (and quite impressive), but it is easy to make and probably the best cheesecake recipe I have ever tried!

Preheat oven to 350 degrees F. Fill a large roasting pan with warm water and set aside.

Mix together the crust ingredients and press into an 8" springform pan (I used a 9" because that was all I had, but I wish I had an 8" so it would have been taller). Press crust along the bottom of the pan (do not press to the sides). Bake in the oven for 10 minutes. Set aside and let cool as you make the cheesecake.

Place cream cheese in the bowl of a stand-mixer and beat on medium speed with a paddle attachment for several minutes until smooth, scraping sides and bottom often to incorporate all cream cheese. When the cheese has been mixed well, add the vanilla and almond extracts and sugar and beat well. Add eggs, 1 at a time, until just combined. Do not overbeat.

Combine melted chocolate and the cheesecake mixture until incorporated fully. Place chocolate mixture in pastry bag fitted with a plain #6 tip (1/2 inch) (or you can use a Ziploc bag with the end clipped). Working at table height (you will have more control than at counter height), plunge the tip of the tube in the center of the top of the cake, inserting it only slightly into the cake. Squeeze out some of the chocolate mixture. It will form a ball (tennis ball – or golf ball-size, precise and perfectly round) in the cake and will leave a dark polka dot about 2 inches wide on the top of the cake.

Then, using the same procedure, squeeze out six balls around the rim. In order to space the six balls evenly, place the first one at twelve o’clock (straight up). The next at six o’clock (straight down). Then two on each side. Doing it this way, the chances are that the spacing will be quite even. The balls around the rim should be smaller than the one in the center, and they should not touch each other or the center ball. If you have some chocolate mixture left over add it to the center ball; if you still have some left over add a bit to each of the other balls.

Lift the cake pan out of the water and place it on a cake rack. Cool the cake in the pan for 2 ½ hours.

Refrigerate for several hours or overnight.

To serve, dip a sharp knife in very hot water or hold it under running hot water before making each cut, shake off the water but do not dry the blade. Make the irst cut through the middle of one of the smaller dots and the second cut (the one that will release the first portion between two of the smaller dots.