Mark R’s brownies with sprinkles, modified from my grandfather 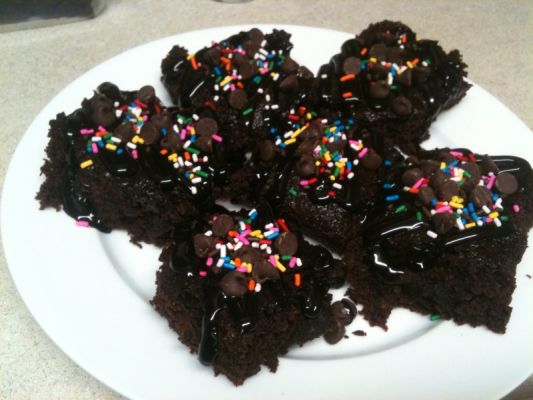 I got this recipe when we were in South Carolina with my Grampa. I then was making some brownies with him for the dinner when I was about 5 years old. I then realized these brownies were really good. I asked him how he made these and my mom wrote it down while he was speaking. I can’t remember what he was saying because I was only 5. I then got home and my mom made them. Ever since then my mom gives me this bag of brown powderey stuff, eggs and a cup of water. Only last year I found the paper she wrote on when he told us about it. I read the actual ingredients and the only thing it was, was brownie mix, a cup of water, eggs, and that was it. The last time we made these brownies was about a month or two ago. I made a modified version and put sprinkles in it. They were a lot better than before. Two chemical changes happen when baking the brownies because the batter goes from liquid to solid and gets darker, which is an unexpected change in state of matter and color. The two physical changes would be putting batter and eggs together and stirring the brownie mix. The two homogeneous mixtures would be vegetable oil and brown sugar. Two heterogeneous mixtures would be brownie mix and cocoa powder. A pure substance would be the water.

take brownie mix and put it in a big bowl. Crack eggs over bowl no pieces of shell in the mix. then you stir for about 10 minutes. after that pour into pan and put in the oven for about 30 minutes on 350 degrees on the oven.then take them out and let them sit for a while. then put sprinkles on top and enjoy your food that i told you how to make