Marrowfat peas with bacon and molasses 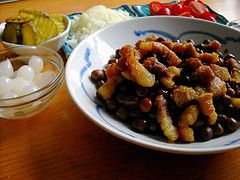 This is a dish I really like. We never had it at home, probably due to Mum’s pork allergy. She preferred brown beans, which she could serve with the pork at the side and have the beans without the pork herself. I learned to eat it at other peoples homes and at friend’s places. The basics are traditionally Dutch, but the things going along with it differ by area and even by families. This recipe is as I had it most often, and I suspect it to be Frisian because of the mustard, but there were also friends who served apple sauce at the side or used smoked bacon instead of unsmoked. There is also a more elaborate version I once saw in a cookbook using things like leeks, onions, rashers of smoked bacon, ketjap manis (sweet soy) ginger powder and piccalilly.

4 In the meantime put the rest of the chopped onions, mustard, cocktail onions and pickled gherkins in separate dishes or bowls

6 Drain the marrowfat peas and mix carefuly with the bacon and fried onions, try not to mash the peas

7 Heat through for a few minutes and serve with the separate bowls, vinegar and molasses on the table