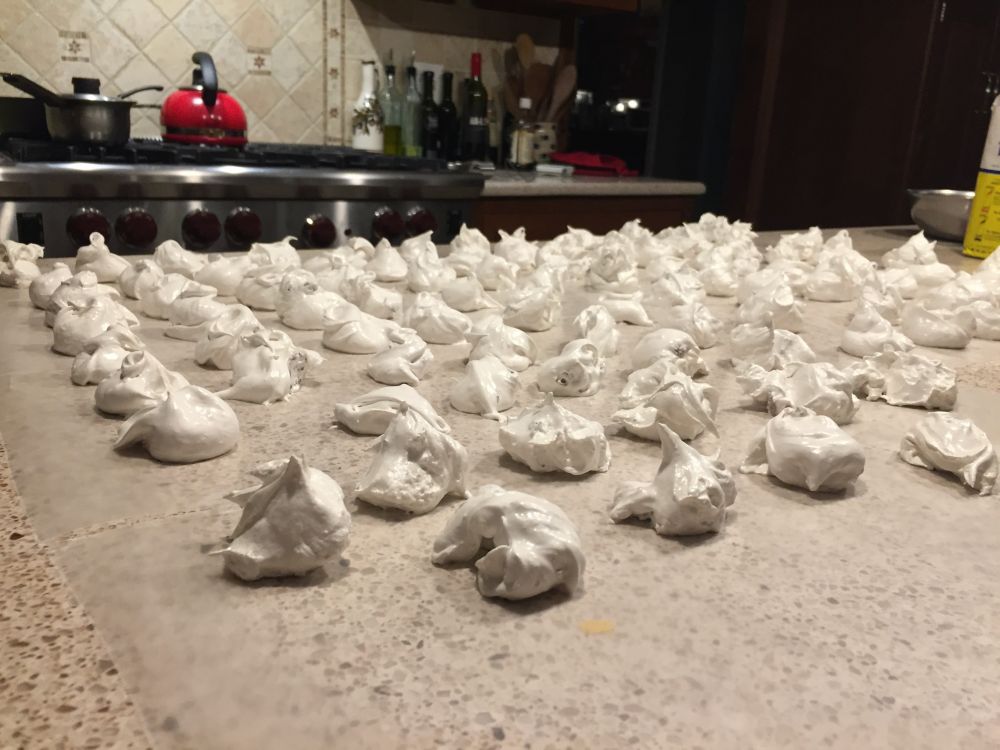 My Mother (Martha Nell (Flaherty) Ray) made this every Christmas for us when I was a child growing up in Mississippi during the 1960's and 1970's. She passed away in 1981 when I was 17, and no one knew how to make it. The recipe she used was from the Eastern Star Cookbook, which didn't have much beyond an ingredients list, lots of sticky sugar stains, and "humidity" written in the margins. Martha Nell knew humidity was important and used "spinning a thread" to determine the appropriate candy stage. It took me several years and many runny batches to work out the details of this recipe and I've been making it for 40 years now.

Mixer: Highly recommend using a stand mixer due to the stiff consistency of the cooling sugar mixture. A hand mixture can be used for the egg whites and the first sugar addition, but be careful---you can easily burn out a hand mixer (I've done it before) if you use the hand mixer beyond the second sugar addition as the sugar cools. If you don't have a stand or heavy duty mixer, you can do it the old fashioned way---Martha Nell only had a hand mixer and a large spoon and a lot of muscle. "Fold" the mixture on top of itself with rapid and rigorous strokes to uniformly cool and add air to the mix as it continues to cool.

Environment--Temperature and Humidity: My mom always said you could only make it on a cold and dry day, which was infrequent in Mississippi. However, with a candy thermometer, and a stand mixer, it is a bit more forgiving. The #1 mistakes are all thermodynamics around moisture removal. First, cooking long enough to boil the water out, which is where the candy thermometer comes in handy. If you get this right, the next is simply patience---let the second sugar addition when its cooled down---and be patient as you to the last beating allowing it to further cool down. It's very tempting to drop the candy, but if it's too hot, it will puddle and THEN cool, and you won't have the fluffy candy you want. Once it goes from shiny to dull white, and seems to skim over, you're on a perfect track. Good Luck!

In a heavy saucepan large enough to only be half full, combine sugar, corn syrup and water and mix to using a spatula until sugar is moistened.

Heat the mixture on High heat, stirring periodically until mixture begins to boil. Continue on high heat as the mixture boils some of the water off, 2-3 minutes. Insert a candy themometer.

Reduce heat to medium and continue to stir, monitoring as the hot liquid approaches thread stage (about 230-235 degrees). Reduce heat if necessary as you approach 220 degrees. Once all the water evaporates from the mixture (210-220 degrees), the temperature will change rapidly. You are targeting 237-240 degrees.

Stop heating the sugar mixture between 237 and 240 degrees. The colder and drier the ambient conditions are, the lower in the range you can stop the cooking. If you are concerned about the candy setting properly, stay more in the top of the range. Try not to go over 240, as the candy will set very quickly and dry out.

Once off the heat, be very careful, the sugar mixture remains very hot for some time! Pour 1/3 to 1/2 of the hot mixture into the egg white mixture and begin to beat on medium/high speed. You are whipping air into the mixture to make it fluffy, helping the last water to escape the mixture to help it set, and cooling them mixture. Do this for 5-7 minutes.

Set the remaining sugar mixture aside and allow to cool until it forms a soft ball in cold water. 10-15 min.

When the second portion of sugar has cooled down to hard ball stage, pour into the egg white/sugar mixture and return to high speed. You will only be able to use a heavy duty stand mixer from this point on.

Continue to beat (5-10 minutes, depending on how fast it cools. Monitor the sheen. Scrape down sides if necessary, pause the mixer from time to time to see how liquid the mixture remains. It will begin to stiffen up as it continues to cool.

Once the sheen turn more dull white and has lost the shine, drop a spoonful on a plate. If it pools into a sticky disk, continue to beat and cool. If it will stand on its own about 1/2" high, you are ready to proceed.

Add the nuts (if desired). I prefer pecans, and simply break them into smaller pieces, and avoid a fine chop. You can also use walnuts if you prefer. Stir on low until the nuts are uniformly incorporated into the mix. Do not over mix with the nuts, as they will break into too small of pieces and disappear.

Move quickly as the mixture will become firmer as it continues to cool. Remove from mixer, and move to the wax paper. Drop using a drop spoon (or two teaspoons). Scrape the sides as you, working from the cooler mixture on the sides to the warmer mixture in the middle of the bowl. This will yield fluffier and softer centers in each piece. Work toward the middle of the bowl which will remain more creamy. Once all pieces have been dropped. allow to set for 12-24 hours. Store in airtight containers