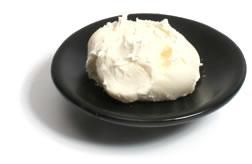 Mascarpone is a triple-creme cheese, made from a generally low-fat (25%) content fresh cream. It's made from the milk of cows that have been fed special grasses filled with fresh herbs and flowers – a special diet that creates a unique taste often described as "fresh and delicious." It generally is used alone (sometimes a bit of sugar is added) or in zabaglione. Milky-white in color, it is a thick cream that is easily spread. When fresh, it smells like milk and cream, and often is used in place of butter to thicken and enrich.Originally, it was produced in autumn and winter for immediate consumption. Generally, the cheese is sold right after processing and should be used immediately. If refrigerated, it will last about a week.

Both authentic recipes, both delicious, and as easy as falling off a log. You don't need a kit, or fancy ingredients, or even much time. Mascarpone takes 12-24 hours to set, but the actual work time is a matter of minutes.

1 pint (600ml) of fresh cream
1/2 teaspoon of tartaric acid (available from pharmacies and some grocers).

Pour the cream into the top of a double boiler and place over simmering water. When the cream is warm, add the tartaric acid, and stir until cream reaches a temperature of 180 degrees (75-80 Celsius). Use a candy thermometer.

Remove from heat and allow to cool, stirring occasionally. Pour the mixture into a bowl lined with thick cheesecloth or a doubled-over tea towel, and leave in a cool place for at least 12 hours, preferably 24.

squirrelwolfs
No I would not use Cream of Tartar in place of the Tartaric acid. Thanks for asking, I added a note about it so people would know what it is.
culinaryalchemist
Just an inquiry, do you have to use Tartaric acid, or can you use salts of the acid such as good old Cream of Tartar (potassium bitartrate)?