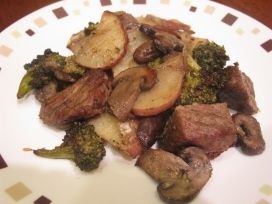 The Russian name for this dish is translated as “French-style meat”. Essentially, this dish is based on any type of meat baked under a layer of cheese and/or a layer of mayonnaise, atop a layer of potatoes. The idea for it originally came from Potatoes Au Gratin (potatoes baked with milk and cheese), though the meat and mayonnaise is an original Russian addition. This makes it a complete meal, instead of simply a side dish. Any type of meat and any type of cheese may be used. It may be made with or without a side dish, such as potatoes (most common), sweet potatoes, or even pasta. The potatoes become drenched with the meat juices during baking, which gives them an extra kick of savory flavor. Vegetables, such as mushrooms, broccoli, cauliflower, or bell peppers, may be added.

1 lb of beef, veal, chicken, or pork (If using beef, try to choose cuts that are well-marbled with fat. I do not recommend any cuts labeled lean or low-fat.)
5 medium or 4 large potatoes
1 onion
5 tablespoons mayonnaise
1 teaspoon of dry dill or parsley

• Slice potatoes into round slices with a thickness between about 1/8 and 1/4 inches. Place on the bottom of a large baking pan as one layer, or as close to one layer as possible. Sprinkle with salt, pepper, and dry dill or parsley.

• Cut the meat into stew-sized pieces (approximately 1”x2” cubes). Sprinkle with salt and pepper. Place the meat on top of the potatoes.

• Slice the onion into thin rings. Place the rings as one layer on top of meat.

• Top everything with a layer of mayonnaise.

• Bake at 350 °F until both meat and potatoes are soft and tender and can be pierced easily with a fork. This should take about an hour.

• Raise the temperature to 450 °F and bake for another 10-15 minutes, until both meat and potatoes are slightly browned.

Make it cheesy: Grate cheese on top of the onion layer. Mayonnaise should go on top of the cheese. Any kind of cheese may be used, though my favorite is mozzarella (use one 16 oz package).

Marinade the meat for extra flavor: If you have time to spare, marinade meat for 1-2 hours with 1/4 teaspoon each of salt and black pepper, 2 crushed cloves of garlic, 2 tablespoons of either apple cider or wine vinegar, and 2 tablespoons of vegetable oil. As an alternative, any store-bought marinade may be used.

Make it more colorful: Add 1/2 lb of sliced mushrooms and/or two heads of broccoli cut into florets as a layer on top of the potatoes. The meat should go on top of the vegetables. Cauliflower, carrots, parsnips, asparagus, and/or any other vegetables that don't contain a lot of moisture can be used as well. (Moist vegetables, such as zucchini or eggplant, may prevent the meat and potatoes from browning.)