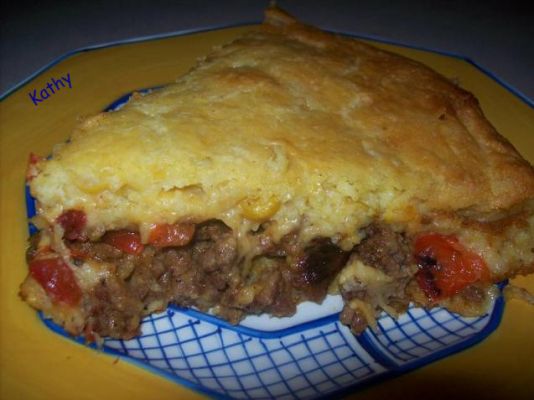 Holy Guacamole, this is one crazy good dish! If I had been naming this dish, I would of named it NASCAR Day Mexican Cornbread Skillet Pie because we were watching the NASCAR race! I want to say that we love Jiffy Cornbread so I used 1 box of Jiffy in place of the cornbread ingredients! I mixed the Jiffy according to the box instructions and then added the green chiles, cream style corn and sour cream and then mixed it with the Jiffy mixture! I didn't have an oven proof skillet so I used a 9 inch glass pie plate and ended up baking it about 70 minutes and I'm sure it took longer because I didn't have the oven proof skillet! As soon as dinner was served, it was gone, no leftovers! Delicious!

Preheat the oven to 350 degrees.

Mix the first 8 ingredients in a bowl and set aside.

In a medium pan, saute the onions, garlic and peppers over medium-high heat until soft. Add in the ground beef and cook through. Drain off grease and stir in the tomatoes, cumin, chili powder, black pepper, salt and cayenne pepper. Remove from heat.

Grease a cast iron skillet (or any oven-safe skillet) and sprinkle the bottom with a little cornmeal. Spread half of the cornbread mixture, followed by the beef mixture. Top with the cheddar cheese, then spread the remaining cornbread mixture over the top.