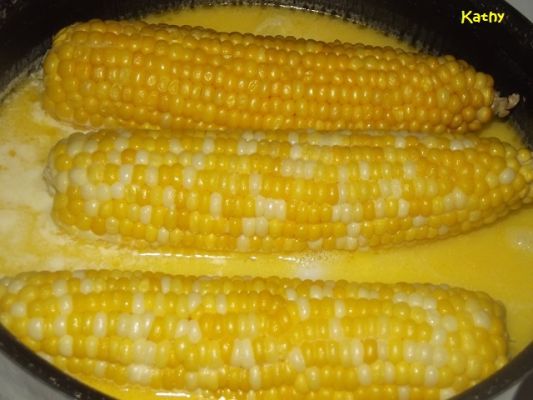 I decided to try this after seeing it on Facebook! There was a method given but no name of the recipe! After some research and after I had already made it, I found Milk Boiled Corn On The Cob and the recipes I found called for sugar or brown sugar which I didn't use! I had just bought some fresh sweet corn on the cob and I feel like I wouldn't have added the sugar anyway!

To be honest my corn turned out just as delicious as usual! I didn't really notice a big change boiling it in milk, heavy whipping cream and butter but there may have been a slight change says my hubby! Maybe adding the sugar would have been a noticeable change! Either way, corn was delicious and it was our 1st of the season!

My family and myself love our corn cut off of the cob after cooking so that's the way we had ours, slathered with lots of butter!

In a large pot, bring water, milk, heavy cream and butter to a boil. If using sugar, add it as well.

Remove corn from pot and butter and salt & pepper it.