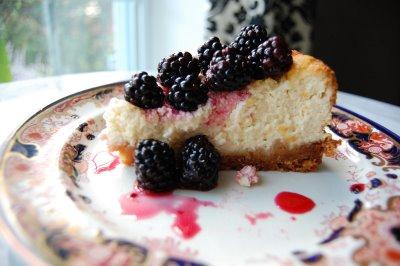 I bought the Gourmet August 2008 issue. On the cover was a cheesecake with black berries. We went to Taylor Farm in Dundas, Ontario, to buy wild blue berries and they had black berries so we decided to try the cheesecake. Dan found a recipe for a light as a cloud cheesecake, it was ok. I think if you made the cheesecake in the gourmet recipe it would be much better. I will put up the light as a cloud recipe as well for you if you would like to try it. We did not use the mint as I do not like it. Also added 4 tbsp. sugar to the berries.

Make Crust:
Preheat oven to 350ºF with rack in middle. We used a 8" high top spring form pan with the removable buttom.

Beat together butter and brown sugar with an electric mixer until light and fluffy. Reduce speed to low and add flour and almonds, mixing until combined and dough begins to clump together.

Press onto bottom of baking pan with floured fingers.

Bake just until a shade darker and edges begin to pull away from pan, 20 to 30 minutes. Cool crust completely in pan.

Beat together cream cheese, sugar, and flour with cleaned beaters at medium speed until smooth, 1 to 2 minutes. Reduce speed to low and add half-and-half, then eggs 1 at a time, mixing until incorporated. Pour filling into crust.

Bake in a hot water bath until set 1 1/2 inches from edge but center is still wobbly, 40 to 45 minutes. (Center will set as it cools.) Transfer pan to a rack and cool completely, about 2 hours. Chill, uncovered, at least 2 hours.

Cheesecake can be chilled (loosely covered once cold) up to 3 days.

Stir together all ingredients in a bowl or airtight container and let macerate at room temperature 30 minutes.

Blackberries can be chilled (after macerating) up to 2 hours.

Once cheesecake is cooled remove from pan and slice, place on plate and add the blackberries on top and drizzle the blackberry juice over the top.

This is the recipe we used for the cheesecake

Light as a cloud Cheesecake